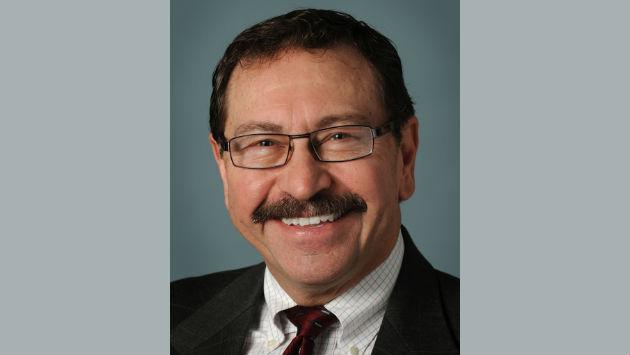 In the midst of all the bad news about critical underfunding of most public employee pension plans in Illinois, Evanston got a visit from the head of the one major exception to that litany of woe Monday evening.

Louis Kosiba, executive director of the Illinois Municipal Retirement Fund, stopped by the City Council meeting to give the city a collection of souveniers to honor it as one of the first five municipalities to join the fund when it started operations some 75 years ago. 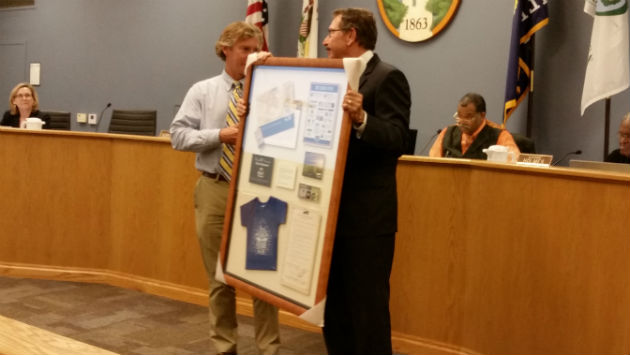 Kosiba with the collection of mementos he handed mayor pro tem Don Wilson.

The big difference, Kosiba said in an interview, is that rather than being dependent on appropriations by the state legislature — which has consistently under-funded the programs it oversees for teachers, and state employees, IMRF gets its money directly from the participating municipalities and their employees.

"And oh, by the way, you don't get to skip a payment," Kosiba says, noting his agency has the authority to sue local governments or garnish their tax receipts to cover payments the agency's actuary determines are necessary.

"With that type of authority there really is a culture where IMRF employers continuously contribute, and if someone falls off the tried and true trail, we go after them," he says.

Kosiba says legislation passed several years ago will eventually give fire and police pension funds the same sort of authority, but they don't have it yet.

IMRF, he said, also benefits from having a central management structure that now serves nearly 3,000 municipalities. By comparison, each town's fire and police funds are individually managed.

And each fund, he says ends up with "dueling actuaries." The municipality has one, the pension fund has another and the state's insurance department has yet another. They all come up with their own numbers depending of differing assumptions — which makes it easier for local lawmakers to pick the one that recommends the smallest level of payments now — kicking the pension funding problem down the road.

The small public safety funds also have much tighter state-mandated restrictions on the type of investments they can make, which cuts the investment yield they can reasonably achieve

IMRF's record hasn't been perfect. It lost 24 percent on its investments when the market cratered in 2008. It gained the 24 percent back the next year — but that only got it back to the starting point.

Kosiba says IMRF currently estimates it will average a 7.5 percent rate of return on its investments.