The Preservation Commission tonight approved demolition of one historic home but denied a teardown request for another. 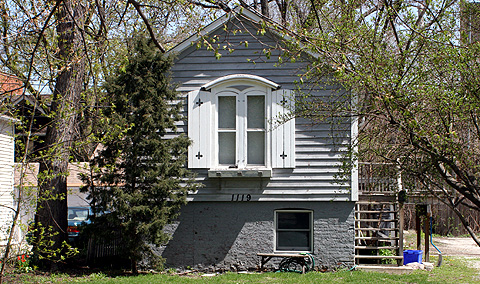 Commissioners conceded there was no practical way to save a tiny cottage at 1119 Oak Ave. and approved its demolition on a 5 – 1 vote.

But they unanimously rejected a request to demolish a house at 1218 Elmwood Ave., saying the owner hadn’t tried hard enough to find a way to save the property.

Builder-developer James Wigginton built the cottage on Oak in 1873, shortly after he first moved to Evanston. As his business prospered, he built two other, much grander, architect-designed homes on the same block, both of which still stand.

The commission previously urged developer Michael Sieja and his architect, Ellen Galland, to come up with a plan for moving the cottage to the rear of the lot for use as a studio space that might still be visible from the street. 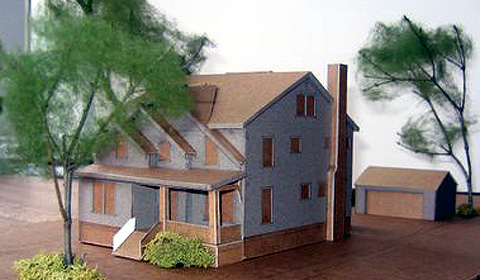 A model of architect Ellen Galland’s proposed design for the new home at 1119 Oak Ave.

But they reported back that several mature trees would have to be removed to have any chance of making the relocated cottage visible from the street. They also argued that the relocated cottage would make it difficult to locate a new garage on the lot, that it would interfere with views from windows in the apartment building east of the property and that it was too narrow to be incorporated into a new garage and retain its character.

Mr. Sieja also said that only a portion of the brick foundation is actually original to the building, that it has new siding and vinyl double-hung windows so there is hardly any original structure to save.

He suggested attaching a plaque to a granite boulder that would be placed in front of the replacement house that would have a drawing of the cottage and tell the history of it, and the two neighboring homes Higginson built.

Several commissioners, some of whom had toured the property, said they were reluctant to approve the demolition, but in the end only Commissioner Emily Guthrie voted against it.

The house on Elmwood was the home from 1888 until his death in 1906 of Henry Boltwood, the first principal and superintendent of Evanston Township High School 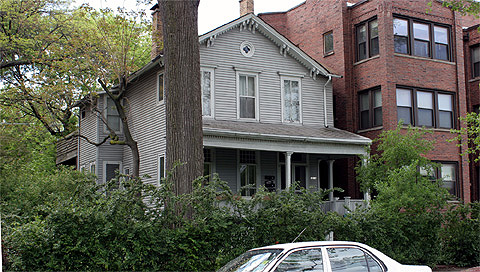 Owner Carole Brite said she and her husband bought the home last year, hoping to restore it, but now believe it is beyond repair.

Her architect, John Zachar, said a consultant’s reports showed that the house has toxic mold spores, which the consultant believes cannot be eliminated from the home.

Her structural engineer, Moshe Calamaro, said practically every element of the structure of the home needs to be reinforced, repaired or replaced from the roof rafters to the brick foundation.

He said foundation repairs would be especially difficult because the foundation has only two rows of bricks, compared to the more typical three rows, making it much more difficult to support the weight of the house while some of the bricks are removed and re-tuckpointed.

But Commisissioner John Pohl said, “All of these things can be repaired.” He added that the house is of a vernacular Italianate design which is now very rare in Evanston.

Commissioner Guthrie said Ms. Brite “bought the house without doing due diligence. You got in and discovered it had a whole lot of problems.” She added that while “it’s a monumental project, I can’t see much that couldn’t be remedied.”

She suggested, “Put the place back on the market. Somebody who’s willing to take on the job will buy it and get it out of your hair.”

The commissioners discussed a variety of possible alternatives, from removing additions at the rear of the house and just restoring the most architecturally significant front portion of the building, to saving only the front facade. But when Ms. Brite asked for a definitive vote, they turned down the demolition request.

Ms. Brite indicated she plans to appeal the denial to the City Council.