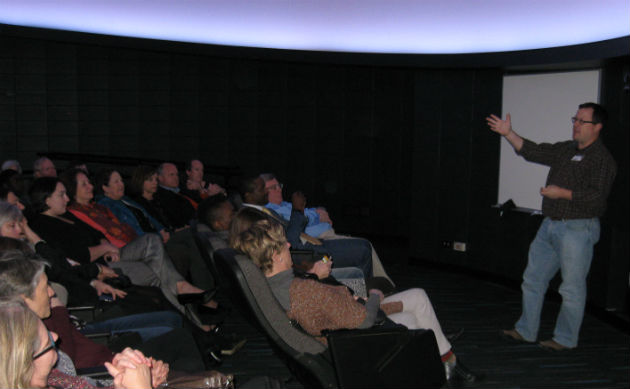 A legendary Evanston group thought it was approaching its centennial anniversary in a couple of years, only to find out at its November meeting last night that it may have missed it by 15 or 16 years.

The group is the Current Events Class of Evanston, which meets monthly during the fall and spring months to hear speakers on a variety of topics.

Last night it met in the rehabilitated Planetarium at Evanston Township High School to hear a lecture on gravitational waves delivered by GionMatthias Schelbert, the astrophysics instructor at the high school.

But before the meeting began, the club’s president for the 2017-2018 season, retired Northwestern University chemistry professor and provost, Louis Allred, revealed some facts he had learned about the group from delving into its extensive archives.

“The year of formation of the Current Events Class,” he said, “has been assumed to be 1918, apparently on the basis of an unsigned account probably written in 1922, but without documentation.”

But five newspaper articles, published in 1912, he said, suggested that the group “originated at the First Congregational Church of Evanston and imply formation in either 1901 or 1902, probably 1901.”

Adding to the confusion was that the original name of the group may have been the Cooperative Class that was later renamed the Current Events Class.

Its first president may have been Northwestern Professor J. Scott Clark, who is also noted for being the composer of the university’s alma mater, “Hail to Alma Mater.” Professor Scott died on Dec. 28, 1911, according to his obituary in the Evanston News and the Daily Northwestern.

His obituary in the Jan. 4, 1912, issue of the Daily Northwestern stated that “he was the founder of the Current Events Class, which has proved to be one of the most popular organizations.”

Currently, the organization meets on the third Thursdays of October, November, March, April, and May in various locations around town.

Among the speakers in recent years have been Northwestern President Morton Schapiro, school superintendents Paul Goren and Eric Witherspoon, City Manager Wally Bobkiewicz, and a number of professors from Northwestern and DePaul universities.