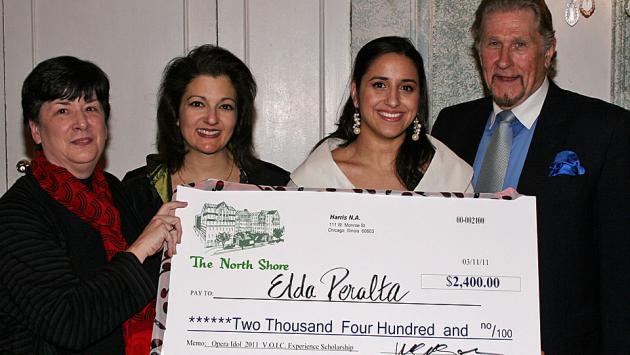 The ballots are in, and the audience at the North Shore Retirement Hotel has spoken. Evanston resident Elda Peralta has been named the 2011 Opera Idol Winner.

Peralta was among six finalists vying for the title of Opera Idol. The finals were presented in a Master Class format with the internationally renowned opera star Sherrill Milnes, providing guidance and coaching to Peralta as she performed her winning aria “Una voce poco fa” from Rossini’s The Barber of Seville.

Peralta has been an avid music lover since the age of nine. As a teenager, she wanted to study music, but having been born and raised in Tijuana, Mexico, Peralta found it difficult to locate an appropriate school to further her musical interests.

“My father was able to acquire a visa through his job, and subsequently my family moved to San Diego,” explains Peralta. There, at the start of her sophomore year, Peralta attended the performing arts division of a public high school where she joined the choir and studied jazz and chamber music. “I was intent on wanting to study music, and even though my parents thought I would change my mind…I never did,” she says.

As a music education major at Point Loma Nazarene University, Peralta had to select a musical instrument, and she chose voice. “I did not grow up exposed to classical music so this was completely new to me as a college student,” she confesses.

In 2003, during her very first vocal competition with the National Association of Teachers of Singing (NATS), Peralta placed second. “I began to really fall in love with the vocal art form. I started to enter more competitions and attend concerts to learn more about the classical music genre,” explains Peralta.

During a competition with San Diego’s La Jolla Symphony, Peralta won, allowing her to sing with the symphony. “It was a great experience for me, and I later was able to work with the orchestra in Baja, CA and the Opera de Tijuana,” she says. Right before her senior year, Peralta auditioned for the San Diego Opera Chorus and was selected, performing with them for three seasons.

After college, Peralta worked as a Middle School Choir Director for two years and then moved to the Chicago area for Graduate School at Northwestern University, where she earned her Masters in Music and Vocal Performance. “I aspire to be able to sing. It doesn’t matter where, but to use my gift wherever possible is what’s important to me,” states Peralta.

Elda Peralta took home the grand prize – a full ($2400) scholarship and airfare to attend the nationally recognized two+-week workshop “Sherrill Milnes and Friends” directed by the renowned American baritone and sponsored by the V.O.I.C.Experience Foundation. Milnes and other professional V.O.I.C.Experience faculty members lead the intensive program for aspiring young singers, held in August in Tampa, FL.

Sherrill Milnes founded the non-profit V.O.I.C.Experience organization in 2001.   As the group’s artistic director, Milnes works with Executive Director Maria Zouves, “to provide performance and study opportunities for singers, while creating an outreach of opera and musical theatre to the communities of the world.”

“The Opera Idol competition was wonderful. North Shore staff and residents made us feel at home as singers, and for performers, that’s really important,” says Peralta. “I felt like I was performing for my family,” she adds.

In looking to her future, Peralta hopes to visit low-income communities in the states or around the world and teach a love for music. “The arts give us imagination, and I believe if you can teach imagination you’ll have the ability to solve anything no matter what profession you’re in,” she concludes.

Upon completion of the V.O.I.C.Experience workshop, Peralta will return to the North Shore Retirement Hotel in the fall to present a solo recital as the 2011 Opera Idol winner.