Opponents of the Church Street Village proposal for the former Hines lumber yard at 1613 Church St. told aldermen Monday night they’ve collected signatures of 77 nearby residents who oppose the project.

The developers are asking for a zoning change from I2 industrial zoning to R5 residential zoning.

Ms. Safford said the neighbors differ among themselves about what the appropriate zoning would be, but think it should be R3 or R4 â€“ either of which would permit far fewer residences than the 41 townhomes the developer wants to build on the 1.5 acre site.

The neighbors also disputed the developers’ claim that the project would appeal to moderate-income professionals, including teachers at nearby Evanston Township High School.

They claimed the developer’s traffic study, conducted during August when local schools are not in session, underestimates the level of traffic on Church Street during most of the year.

Developer Walter Kihm said there’s been a lot of interest among local teachers, and others, in the project, although he said he’s been reluctant to engage in marketing of the project before it’s approved.

The developer’s attorney, James Murray, said there is no traffic problem â€“ that the level of service on Church Street would remain the same whether or not the property is redeveloped.

Alderman Ann Rainey, 8th Ward, asked the developer to provide the council with a written explanation of the economics of the project â€“ and why he believes a smaller development on the site would have to lead to dramatically higher selling prices for the units.

The committee scheduled a special meeting for 5:30 p.m., Monday, March 20, to continue its review of the Church Street Village project.

Update 3/17/06: The committee has cancelled the special meeting planned for March 20 and is now scheduled to consider the Church Street Village project at its next regular meeting at 6:30 p.m. on Monday, March 27. 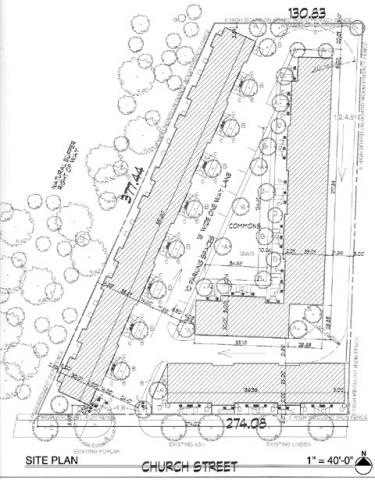