Neighbors voiced a host of fears about the proposed Optima Promenade development at 1515 Chicago Ave. at the latest Plan Commission hearing on the project.

Neighbors say traffic from the project would aggravate congestion in the alley behind the site.

Diane Lequar of 1516 Hinman Ave. and Kristine Westerberg of 525 Grove St. countered the developer’s PowerPoint presentation with one of their own last week. 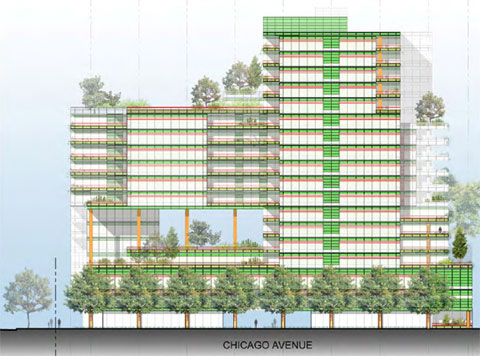 An elevation drawing showing the side of the proposed building facing Chicago Avenue.

Mary Linberger, the developer’s real estate consultant, said the average selling price of existing condos in Evanston has risen 35 percent over the past five years, despite the construction of several new high-rise buildings during that time.

She said there’s no basis for concluding that development in downtown Evanston has diminished property values.

The neighbors also argued that the 20-foot-wide alley behind the site is too narrow to handle all the traffic in and out of the proposed building’s parking garage.

Community Development Director James Wolinski responded that there are no current plans to widen the alley. â€œThat’s not to say it couldn’t be done,â€ Mr. Wolinski said, â€œbut widening alleys in Evanston is very difficult unless someone is willing to give up some real estate.â€

The neighbors also voiced concern about the noise produced by mechanical units in the new building.

Mr. Wolinski said that in responsed to neighbors’ complaints he checked the Optima building at 800 Elgin Road and found what he considered a violation of noise regulations there. The city mechanical code requires that sound from mechanical devices mounted on the exterior of a building not exceed 55 decibels at the property line.

He said existing codes don’t specify noise limits for mechanicals housed inside a building, but that reasonable restrictions could be imposed as part of the planned development process.

The Plan Commission will continue its review of the Optima project on May 10.

Available as attachments below are the presentations of the neighbors group and the developer. Both files are quite large and may take a while to download.