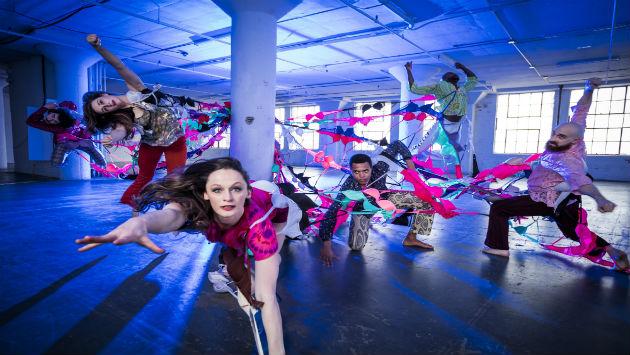 Modern dance and tango are featured in two dance performances this weekend. “Santuario/Sanctuary” opens as the third in Piven Theatre’s Identity series. It’s the final weekend for Second Act Players and “The ARC Trials” at Mudlark. And of course there’s lots more on stage in an around Evanston.

RockCitizen
Modern dance performance presents an immersive sonic, visual, and kinetic environment that recalls countercultural spaces and powerful voices of change of the 1960s and 70s and connects them to a larger history of people pursuing breakthroughs and transformations in their lives and worlds. Designed for age 12 and above.
At Studio5, 1934 Dempster St., Nov. 16-17, tickets $30

Tango Legends
A dance ensemble of eight tango masters will feature the brilliant Mariela Maldonado and the superb Pablo Sosa. Musicians and singers from Argentina will perform the music of Astor Piazzolla and other tango romantics.
At North Shore Theater, 9501 Skokie Blvd., Skokie, Friday Nov. 16, tickets $45-75

Santuario|Sanctuary
Proyecto Migración is a documentary theatre project exploring the parallel and divergent migrations of monarch butterflies and youth across the USA-Mexico border. Based on over 30 recent interviews with (im)migrants, nuns, volunteers, scientists, and law enforcement in the USA and Mexico, Proyecto Migración aims to highlight the multifaceted complexity of the border, where international law protects small insects yet abandons human beings to their deaths.
At Piven Theater, 927 Noyes St., Nov. 16-18, tickets $15

New Year’s Eve at Grandma’s House
An Italian-American family gathers to celebrate New Year’s Eve 1960, its first without the family patriarch. The country is changing with the election of the first Catholic president and the family is changing as well, its younger members wondering what they should do to be accepted as being truly American.
By Second Act Players, at Northminster Church, 2515 Central Park Ave., runs through Nov. 18, tickets $17-22

A Chorus Line
A Broadway chorus audition comes to life in one of the most celebrated musicals of all time with a brilliantly complex fusion of song, dance, and drama.
At Ethel M Barber Theater, 30 Arts Circle Drive, runs through Dec. 2, tickets $30

The ARC Trials
In a future where earth can no longer support life, a select group of children lives aboard the Nox Treader, an interstellar spaceship. Raised and educated by humanoid robots, they learn about “Earth That Was” and the distant planet to which they are headed. But something isn’t quite right aboard the ship. Important information is missing from the children’s lessons. Memories are missing from their heads. Those who ask too many questions are sent to the med bay and come back… different. It’s up to a young girl named Cressida to get to the bottom of the mystery before it’s too late.
At Mudlark Theater, Noyes Street Theater, 927 Noyes St., runs through Nov. 18, tickets $10-12

Witch
Mischief is afoot in the sleepy village of Edmonton and the fate of the world is at stake in this smart modern fable. When the emotionally conflicted son of the local lord and an ambitious newcomer come into conflict, help presents itself to both of them in the same guise—as the Devil himself. But while these two young men take advantage of the Devil’s bargain to accomplish their own questionable ends, someone else in town stands her ground—Elizabeth, an outcast whom everyone believes to be a witch.
For ages 14 and up.
Writers Theatre, 325 Tudor Court, Glencoe, runs through Dec. 16, tickets $50