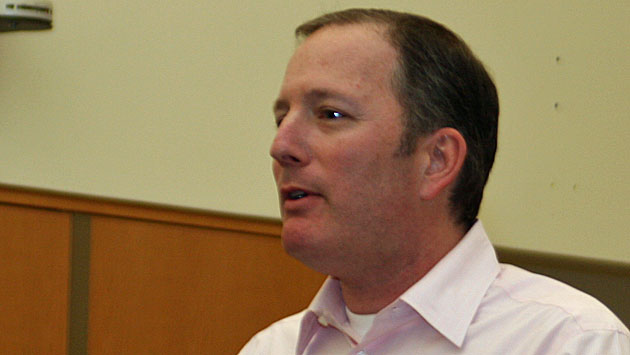 The new owners of Evanston Plaza say they have no plans for a major renovation of the struggling property, or for adding housing to the site.

The new owners of Evanston Plaza say they have no plans for a major renovation of the struggling property, or for adding housing to the site.

Scott Inbinder, a principal with Bonnie Investment Group, told residents at a 2nd Ward meeting Thursday night that because of "environmental issues" stemming from the one-time factory use of the property, "residential housing is something that's not plausible."

And Inbinder said Bonnie is unlikely to spend mony on a major renovation of the property.

"As much as we would like to renovate the entire center, we won't get rents to cover the cost," he said. "And a lot of potential tenants don't want to see a center renovated — it makes the center too nice for the type of discount products they sell."

However, Inbinder suggested that a city-created tax increment financing district could be a way to fund upgrades at the property.

Inbinder, whose firm has owned the property for just six weeks after buying it from the bank that obtained it from the prior owner at a foreclosure auction, said his company's goal is to gradually fill the vacant stores with new tenants.

"As I walk through the center now, it's empty — no cars in the parking lot and there's a concern about crime," he said. "I want to return it to where it was one day in the past — a well-leased, vibrant center."

He suggested that changes in the retail marketplace have left shopping center owners with less leverage than they used to have in selecting tenants for their properties.

"This center has suffered a little because a lot of national tenatns like to be in more of a regional location — either Old Orchard or downtown Evanston," he said. "They may feel that a location at Evanston Plaza overlaps with those or potentially would cannabalize sales in an existing location."

He said that with a lot of vacant space to fill, Bonnie plans to start by trying to lease the larger spaces, because filling those will help attract tenants for the smaller ones.

And despite issues with restrictions on what new stores can be brought to the center imposed by anchor tenant Dominick's supermarket, he urged the neighbors to shop there.

"The best thing you can do is support that store. The better Dominick's does, the more inclined they'll be to stay and to help us in making it easier to lease the vacant space," Inbinder said.

"Potential new tenants will want to know how other stores in the center are doing, and since Dominick's is the anchor tenant, that's the first call they'll make."