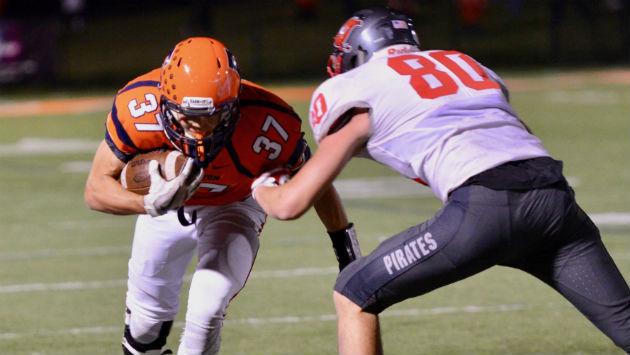 Palatine’s past success in the Illinois High School Association Class 8A state football playoffs was no accident.

The Pirates’ ability to run the football — and stop the run — taught Evanston an object lesson Friday night at Lazier Field.

Palatine handed the Wildkits their first defeat of the season, and didn’t punt once in a convincing 35-12 victory that left both teams with 2-1 records. The winners dominated time of possession with two touchdown drives lasting more than 7 minutes, and their only possessions that DIDN’T result in scores came at the end of both halves.

“We didn’t respond when we needed to respond tonight,” admitted ETHS head coach Mike Burzawa. “To win games you have to run the football, and stop the run, and we didn’t do either very effectively tonight. And all those penalties (9 for 95 yards) just killed us. We need to be a more disciplined team because you can’t beat a good team with all those penalties. Give Palatine credit for coming out of here with a W. We knew this would be a tough challenge.”

The Pirates, who reached the state semifinals in both the 2015 and 2016 playoffs, only led 14-6 at the halftime intermission following a sustained march by the hosts just before halftime. Evanston quarterback Drew Dawkins (14-of-19 passing for 129 yards, 10 carries for 33 rushing yards) led the Kits on a 16-play, 84-yard drive that also lasted about 7 minutes.

A juggling catch by Roman Hunt at the 5-yard line set up a TD burst by Dawkins on the next play. The Pirates blocked the PAT attempt by Tyler Tomasello, however. 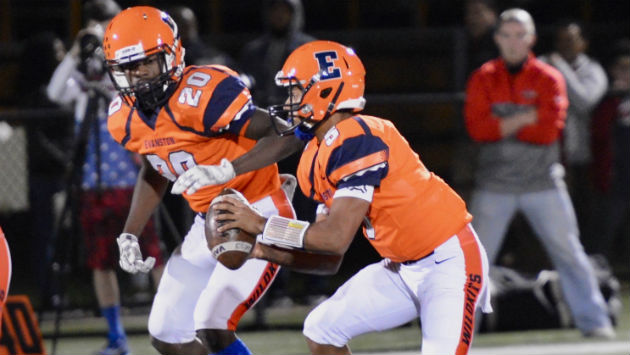 Palatine answered with a 69-yard drive to open the second half as quarterback D.J. Angelaccio hooked up with star receiver Johnny O’Shea  for a 17-yard TD pass. A 5-yard TD run by Charlie Canty shoved the Wildkits into a 28-6 hole late in the third quarter.

Malik Ross’ 58-yard kickoff return sparked new life in the Wildkits, and three plays later Dawkins connected with Mike Axelrood (9 catches for 84 yards) for a 27-yard touchdown to cut the deficit to 28-12 with 1:23 left in the third quarter.

ETHS senior Fletcher Brown recovered the subsequent onside kick, but the momentum shifted back to the visitors on the next play. Dawkins tried a deep pass to Hunt, but the Evanston receiver ran into the back judge and the pass fell harmlessly to the turf.

Instead of a 38-yard scoring pass that would have closed the game to within a single possession, the Kits saw the drive stall out at the 29, with a holding penalty also playing a role.

“We ran that double move so well, and he runs right into the official. That was a bad break,” Burzawa said. “I don’t know if that would have been a touchdown or not. We’re not making any excuses.”

Palatine sealed the victory with another time-consuming drive, as Angelaccio hit paydirt on a 4th down run from the 2 with less than 2 minutes to play.

Palatine’s Darryl Garner paced the winners’ attack with 120 yards on 23 tries, including a 4-yard TD run in the first half. Evanston only mustered 72 yards on the ground on 24 attempts.