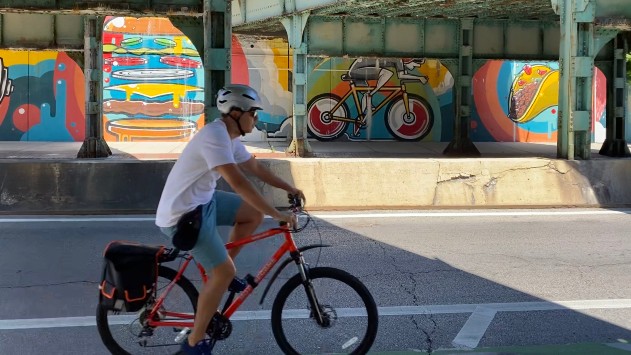 A cyclist passes the bike rider mural under the Church Street Metra viaduct.

Buses and trains looked less attractive. Stay-at-home advisories led to less car traffic. And canceled events gave people an even greater desire to get outside.

No matter the reason, Evanston has seen a significant jump in cycling since the COVID-19 pandemic escalated in March, and some of the city’s bike enthusiasts hope riders’ eagerness is here to stay.

Those traveling down popular routes like McCormick Boulevard, Dodge Avenue or the lakefront have noticed the increased traffic.

“On the North Branch trail or any of the county trails, especially on weekends, there are a lot more families riding,” Evanston Bicycle Club president Alvin Spector said. “The trails are a lot more crowded. Where we used to just zip along various speeds, now you have to be very careful because there are a lot more people out there cycling.”

For some, the pandemic led to a rekindled interest in the activity.

“There are so many people that just pulled their bikes out of the garage, got it out of the basement, put air in the tires and they’re out riding,” Eric Krzystofiak said.

But for others, the trend led them to one of Evanston’s bike shops, where spikes in sales — a 121 percent increase in demand for adult lifestyle bikes and a 59 percent increase for children’s bikes across the U.S. in March, according to market research group NPD — have led to sustained shortages.

“It has probably been the most challenging 160 days of my life,” said Krzystofiak, the general manager of Wheel and Sprocket.

Business was slow at first, Krzystofiak said, but picked up as Illinois’s new coronavirus cases waned and the reality of the moment started to set in, especially among parents adjusting to the reality of having kids at home all day.

“[By] the end of April, we were running out of bikes,” he said. “Nationally, it was a challenge just to get machines in the store.”

While the supply chain has improved somewhat, Wheel and Sprocket is still heavily backordered, looking at November arrivals for some new orders. There are also wait times for repairs.

Riders have also begun taking greater advantage of the Divvy bikeshare system. While trip numbers fell in March and April, compared to the same time in 2019, they resurfaced in May and are now higher than last year.

“We’ve started to see an uptick in rides — particularly in casual rides,” spokesperson Kaitlyn Carl said in an email. “This does make sense as people are commuting less but turning to Divvy for general transportation, essential trips and leisure.”

Among Evanston’s new riders are 16 members of the Evanston Public Library’s virtual Girls Cycling Club, a program for Black and brown girls that’s part of the library’s push to increase education and participation in STEAM fields for underserved communities. The club teaches its members about bicycle mechanics and riding.

“The cycling industry is kind of white male-dominated. Bringing in diverse voices, both as young women and as Black and brown people, I think that’s really important,” said Courtney Reed-Tanner, a Teen Loft staff member who runs the club.

The library hopes to introduce participants to new aspects of literacy and inspire new interests, Reed-Tanner said. Although the program went online in March — leading to some challenges demonstrating the mechanics tutorials over video — members ride with their parents or friends, and the library provided bikes, locks and helmets for those who needed them.

Reed-Tanner said she hopes to make the club sessions available online, and potentially to offer a physically distant iteration in the fall, if conditions permit. Reactions from this session and previous offerings in person at Evanston elementary schools have been positive.

“I get feedback from several parents that their daughters would feel much more confident and excited and motivated to get out from doing the class,” she said. “So I think sometimes it just takes a little bit to get over that barrier of, ‘Oh, I’m scared of cars,’ or ‘I’m not physically able to do this,’ and having a group or a little bit of encouragement of other people that are getting over that barrier. It’s sometimes all you need, and then it provides its own reward.”

The Evanston Bicycle Club, whose members skew a little older than the library club’s, resumed its group rides in late June, albeit with changes for safety. Trips are capped at 15 riders, Spector said, and masks are mandatory. Instead of the frequent destination of a North Shore eatery, the rides often end with picnics in a park where participants bring their own food.

In addition to safety measures like helmet-wearing, Krzystofiak said he also encourages riders to leave plenty of space for other cyclists and trail users during the pandemic, giving wide berths if they intend to pass someone.

Congestion on popular trails means being more creative with routes, either for organized rides or casual outings, Spector said. Luckily, the club maintains a detailed route library with more than 200 options across Evanston, Chicago and northern Illinois. There’s also a new “pandemic 2020” library with “meander routes.”

With all these opportunities to get outside and ride, proponents hope the habit will stick.

“I think this is going to be extremely positive for cycling,” Krzystofiak said. “In my career I’ve never seen this. I’ve just never seen this many people want to ride their bikes.”

He said the opportunity for physical exercise, the chance to be outside and Evanston’s improving cycling infrastructure could incentive many to stay on two wheels for good.

“It’s one of those perfect win-win-win scenarios where I’m doing something I enjoy, and you find the fun adventure part of it,” Reed-Tanner said. “You see things, you meet new people, you go to places that are a little bit farther than you normally go to. But you also feel like you’re doing something good.”