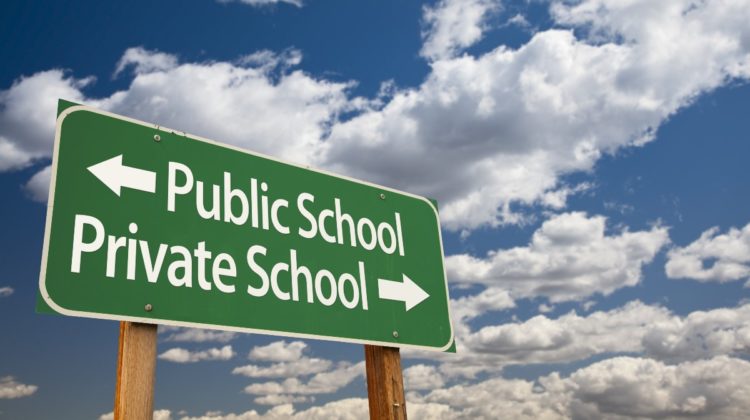 When the young couple bought a home in 2008, a big reason for choosing Evanston was the quality of public education.

“We moved back largely because of the schools,” says the dad, who agreed that we refer to him by his middle name, Joe, for this story.

The family immediately enrolled their first child in kindergarten, and the youngster continued through District 65 and District 202, earning a diploma from Evanston Township High School a few weeks ago.

“We are all proud Evanstonians and share the community’s values,” Joe says. “One of those values has been academic excellence.”

So their second child was launched on the same public school pathway. But this fall, for eighth grade, that child will be leaving District 65 to attend private school.

“I see the school system in Evanston progressively getting worse, not better,” Joe says. He’s not happy with how long it took for the public schools to return to in-person learning, and then, how things went when it did happen.

His second child was put in a “zoom room,” where students were on their computers all day, without a teacher in the class … not much different than remote learning at home.

“That’s not the kind of education my child deserves,” he says.

If Joe was alone in that thinking it would be one thing. But he’s not.

Evanston Now spoke with half a dozen parents, all of whom have taken or will be taking their children out of the public schools for the same reasons.

None of them would talk openly, for fear of having their motives questioned. Joe was willing to tell his story, but without a last name.

But whether they talk or stay silent, some families are leaving.

An Evanston Now survey of local private and parochial schools found a larger than usual increase in enrollment for the upcoming school year, fueled at least in part by dissatisfaction with public school district policies.

Most of the non-public schools in Evanston had already seen enrollment go up early in the coronavirus pandemic, as some families looked for schools with an in-person option versus remote-only in the public districts.

And now, those private schools are seeing an even bigger increase for the upcoming fall.

For example, Pope John XXIII Catholic school reports having 168 students (preK-8) when the pandemic hit in March, 2020. By October, with in-person school back in session, there were 228. And 259 are enrolled for fall 2021, which principal Molly Cinnamon calls “a big leap.”

Cinnamon says, “We thought certainly when District 65 reopened” for in-person learning, the students who transferred to Pope John XXIII during the pandemic would return to their original public schools. “We were worried,” she adds.

However, she says, 95% of the new families have re-enrolled for the upcoming year. And additional new families are signing up as well.

“On the heels of COVID,” she says, “people are hungry for what they had,” a small school environment not filled with controversy.

Other local Catholic schools have a similar story. St. Athanasius had 185 students in the academic year which just ended. For this fall, the Archdiocese of Chicago says 239 children are signed up.

At The Academy at St. Joan of Arc, an independent, non-Diocesan Catholic school, Marketing Director Caroline Kennedy says, “We have had a hefty increase this year,” with an approximately 18% enrollment jump to around 220 children.

As with Pope John XXIII, not only did more students come mid-year, but they are staying for the fall. Retention rate is 97%, Kennedy says.

“The students who found us because of COVID are staying because of the academics and the curriculum,” she adds. “We are wait-listed for every grade.”

At Loyola Academy, a Jesuit high school, enrollment from Evanston is also up. While Loyola is in Wilmette, the school has always attracted a large number of Evanston students. Now the number is even larger.

Spokesperson Robin Hunt tells Evanston Now that those taking the entrance exam for the Class of 2025 increased 38% over the previous year’s test. This fall, there will be 57 freshmen from Evanston attending Loyola, versus 32 in the school year that just concluded.

The Head of School at Roycemore, Adrianne Finley Odell, says, “we Wid see a boost in enrollment and are pleased by that.” She says Roycemore added about 15 students, which may not seem like a lot, but with a total enrollment of about 230 (preK-12), it’s actually a reasonably large percentage.

As with the parochial schools, Odell says, “families who came to us as a result of the pandemic became so happy with the experience that they re-enrolled.”

Roycemore, she says, is a “best kept little secret” in the area. The school received a lot more publicity as parents looked for educational options.

You can also add Chiaravalle Montessori to the list of private schools attracting new families during the pandemic, and keeping most of them for the fall. Chiaravalle enrolls children from 16 months old through eighth grade.

“Retention from kindergarten to grade one is very high this year,” says Beth Caldwell, Communications Director for the 340-student school.

Caldwell says that before COVID, Chiaravalle used to retain only about 65-75% of kindergarteners.

“In non-COVID time,” Caldwell says, “we lost a number of families when free public school was an option.”

There are some caveats to this story.

First of all, not all private and religious school enrollees in Evanston are from Evanston, so they are not all leaving District 65 or District 202.

Second, public school enrollment in Evanston has been trending downward for years, well before COVID, and the controversies over remote vs. in-person learning.

Young couples are waiting longer to have children, the high cost of Evanston housing is a factor, and Illinois is losing population overall

A December 2020 memo from Student Assignment Manager Sarita Smith said, “This year’s enrollment numbers are drastically different due to the impact of COVID-19,” with the largest drop in kindergarteners.

Smith noted that many families “decided not to enroll in District 65 due to remote learning,” and the hope was most of those families would ultimately come back.

“We don’t know,” however, Smith added, “how many will return, how many will feel comfortable with our return to school plan, or the marketing strategies private schools will employ to keep the students enrolled.”

But based on what Evanston Now has found, many of those children will not be coming back, at least not this fall.

Plus, not everyone can afford private school, even if they want to go. Some offer financial aid, but with a range of around $6,800 a year for Catholic school, and well north of $20,000 for private school, coming up with that kind of money is not easy.

But along with some other Evanston parents, Joe also says “I never thought I’d be sending my kid to private school” in the first place.