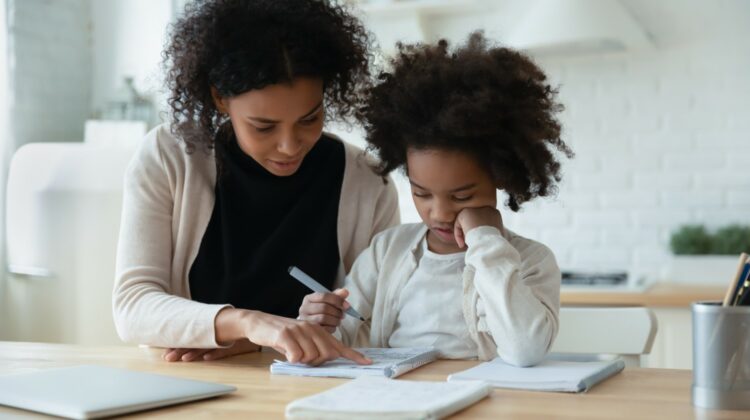 A homeschooling parent and child. (Shutterstock)

Evanston Home Educators, a group of parents who homeschool their children, reports inquiries “are certainly climbing” as a result of the coronavirus pandemic.

Elise Kloster, who heads the group, tells Evanston Now that the organization has received at least 30 inquiries about homeschooling over the past year or so.

Most of those inquiries, she says, are from families who are “new to homeschooling.”

And not every homeschooling family belongs to Evanston Home Educators., which currently has 26 family units as members. Four new families have joined recently.

However, despite the increasing interest, homeschooled students represent only a tiny fraction of the Evanston school population.

Kloster estimates about 50 Evanston children are homeschooled by a parent or guardian. That’s out of close to 11,000 students total in Evanston/Skokie District 65 and Evanston Township High School, or about one half of one percent.

Nationally, the U.S. Census Bureau estimates that about 3.3 percent of students were homeschooled before the pandemic. But a fall, 2020 survey found that number skyrocketing to a hard-to-believe 11.1 percent.

That percentage may indeed be hard to believe, because it’s possible that some respondents confused “homeschooling,” where parents are the teachers, to “school at home” during the pandemic, remote education provided by a school system.

However, there is little doubt that interest in alternatives did grow in popularity during the pandemic, due to parental concern over COVID-19, remote learning Zoom fatigue and various controversies over returning to in-person school.

An Evanston Now investigation recently found that about 200 students did or will leave the local public schools for private or parochial institutions. Again, not a huge percentage, but still, proof that some parents decided to look elsewhere.

Kloster says those pursuing homeschooling, even before the pandemic, had a variety of reasons. Some kids were simply not doing well in school, and the parents wanted to try something else. Some preferred including religion, which public schools cannot do. And there were other reasons as well.

Kloster and her husband have been homeschooling their four children since each child was in kindergarten. The kids are now ages 10, 12, 14, and 16.

“We just liked the idea of the family culture we could have,” Kloster explains.

“We decided to give it a try,” she says, “and so far, nobody has asked for anything different.”

Homeschool regulations, or perhaps, the lack of regulations, vary from state to state. In Illinois, while homeschoolers are supposed to be learning the same things as their public or private school friends, there are no standardized tests and, unless the parents want to hand them out, no grades either.

Kloster says, “We are doing the regular stuff in a different way.” Instead of extracurricular activities like band or sports, homeschoolers often join clubs with other homeschool students, or take music lessons. The city of Evanston, Kloster says, even provided a “home school gym,” but that stopped due to COVID.

Kloster says there are plenty of homeschool resources available online, such as curriculum guides. If she does not feel qualified in a particular subject, Kloster says she might find a tutor, or else see if another homeschool parent could create a group class.

“You look for what matches your kid,” Kloster explains.

Unlike the public or private school year, which has a specific calendar, Kloster says “we tend to homeschool almost all year,” because they take longer breaks.

Applying to college can be different for students without a grade point average, so Kloster says some parents do give marks, although that might not seem very objective.

So, she says some homeschoolers take classes at community colleges, or, as in the case of one of her children, they might take an advanced placement exam to show they can do the work.

At this point, it’s unknown how many students who began homeschooling due to the pandemic will actually return to public or private school.

The public school enrollment numbers will not be released until later this fall.

However, if COVID continues to increase, and if parents become concerned or unhappy about how traditional schools are handling it, interest in homeschooling might pick up again.

“For sure,” says Kloster.