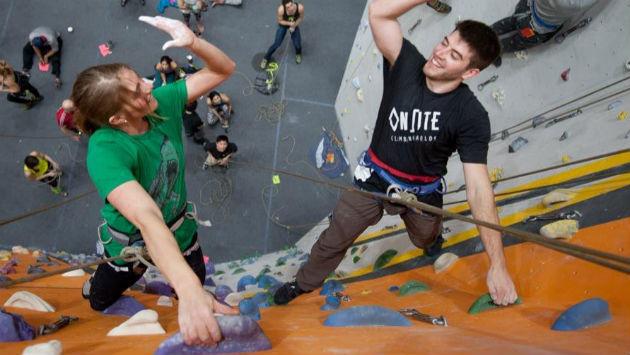 A proposal for a rock climbing gym defeated a plan for a food-themed event space Wednesday night as the Economic Development Committee pondered what to do with Evanston’s former recycling center on Oakton Street.

Committee members said they liked both concepts, but most said they were swayed by the stronger financial presentation from the gym’s backers and by their willingness to buy the long-vacant building outright from the city, rather than leasing it.

India Mussell-McKay presented the food hall and event space plan of Palmhouse Productions, consisting of principals from the Peckish Pig on Howard Street.

Palmhouse offered to rent the building from the city for $168,000 a year.

Alderman Ann Rainey, whose 8th Ward includes both Peckish Pig and the Recycling Center site at 2222 Oakton, said she was “totally opposed to selling the propery outright” and argued that the rock climbing backers “have no connection to our community” while the event space proposal “is Evanston through and through.”

But  Alderman Don Wilson, 4th Ward, said he’s “not comfortable with the city retaining its role as long-term landlords.”

“We’ve seen the adverse consequences of having to maintain a property beyond its existing lifespan and are continuing to deal with those consequences,” Wilson said.

The rock climbing proposal, Wilson said, makes sense for a location adjacent to James Park and with other athletic facilities in the area.

Jon Shepard of First Ascent Climbing and Fitness and Andy Stein of Clark Street Real Estate said that under their plan Clark Street would buy the recycling center site for $1 million and spend between $1 million and $1.5 million on infrastructure and renovation costs. First Ascent, as Clark Street’s tenant, would spend $750,000 on furniture, fixtures and equipment. Soft costs for the project are estimated at $300,000.

First Ascent has four existing rock-climbing facilities in Chicago and others under construction in Arlington Heights and Peoria.

Shepard said the company has 4,000 members across the Chicago area and anticipates having 300 people per day using the planned gym in Evanston.

He said the facility would also offer a co-working space as well as yoga and fitness classes.

In response to questions from Alderman Peter Braithwaite, 2nd Ward, and board member Hecky Powell, Shepard said the company provides activites for climbers with disabilities and that about a quarter of its employees are minorities.

Board member Mary Beth Berns said she believed the rock climbing concept was a better match for recycling center, which, she said, is a unique building in Evanston with its extremely high ceiling height.

The board voted 6-1-1 in favor of the First Ascent plan, with Rainey voting no and Powell, a local restaurant owner, abstaining.

The next step for the project is for staff to prepare documents authorizing the city manager to negotiate terms of the agreement. That would likely go before City Council for approval on Nov. 12.