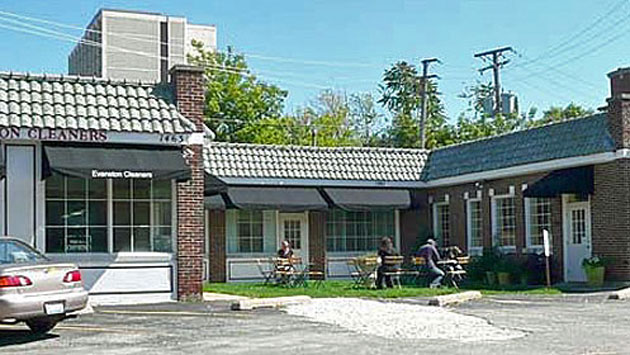 The Economic Development Committee voted 7-4 Wednesday night to reverse a staff recommendation and support a request for a tax break to remove old gasoline storage tanks from a property across from the Evanston police station.

The Economic Development Committee voted 7-4 Wednesday night to reverse a staff recommendation and support a request for a tax break to remove old gasoline storage tanks from a property across from the Evanston police station.

The owner of the former gas station, Randall Cohn of Ventura Realty, said he'd learned only recently from a ground-penetrating radar study that there appear to be three underground storage tanks on the property.

Cohn bought the property at 1459-63 Elmwood Ave. a couple of years ago from a bank that had foreclosed on it.

He says documentation he's uncovered showed that the state environmental protection agency had approved cleanup efforts showing that no contamination was present from a former dry cleaners operating on the site.

And he says he also found evidence that years ago a tank removal company had been paid to remove some gasoline storage tanks from the property, so he assumed that problem had been addressed as well.

But the recent radar study showed that, while the ground had been disturbed at the north end of the site and that tanks might have been removed there, there were still outlines of three storage tanks at the south end of the property.

Cohn said the potential for contamination from the tanks has scared off potential tenants at the property, including the McGaw YMCA, which he said considered opening a child care facility there, and potential buyers, including a restauranteur.

The property has been vacant for some time now. But city staff said Cohn is asking rents about 25 percent higher than that for comparable property in the area and that he has no specific plans for a new post-cleanup use that would let the city recoup the lost property tax revenue.

The Cook County program Cohn seeks to apply for would reduce the tax rate on the property by 60 percent for 10 years and then phase out the reduction over the following two years.

Cohn says he's received estimates that the cleanup project could cost $150,000 — or possibly much more, depending on the extent the tanks may have leaked.

Committee members who opposed the request, including Alderman Coleen Burrus, 9th Ward, focused on whether Cohn should have done further investigation before he purchased the property.

Those who supported it, including Alderman Ann Rainey, 8th Ward, suggested the city is losing tax revenue every day the property remains vacant. "We need to get a move on and get the property cleaned up," Rainey said, suggesting that contamination from the tanks could be spreading across the street to the police station.

The request still requires action by the full City Council.

Seven of the nine aldermen are on the EDC. Alderman Burrus, Fiske and Grover voted against the request.

But with supportive votes from Aldermen Holmes, Rainey, Tendam and Wynne — plus word from staff that Alderman Don Wilson, whose 4th Ward includes the property, also favors the tax break, it appears that the measure is likely to win approval from the council.