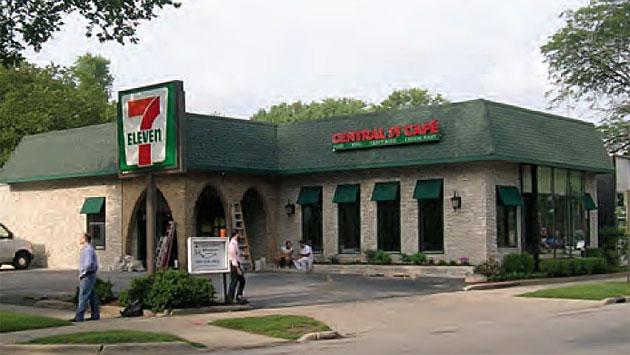 The façade program — budgeted at $75,000 a year — forms only a small part of the city's economic development efforts, which have involved over $10 million in spending this year.

Top: One of the businesses that received a façade grant last year was Central Street Cafe, which used the $9,400 in city money to help convert a former Blockbuster video store into its new location.

Community and Economic Development Director Steve Griffin said it's often hard to judge the return on investment from the façade grants, in part because they most often go to existing businesses that probably would have remained in town whether or not they got the aid.

But he said that tattered awnings and other signs of neglect in a business district can negatively affect people's attitudes about shopping there.

Griffin, in a report to the committee, identified several nearby communities that have similar programs, including Des Plaines, Elk Grove Village, Elmhurst, Mount Prospect, Oak Park and Skokie.

The program in Evanston offers grants of up to $10,000 for the first 35 linear feet of a business's frontage, with the potential for $100 more for every extra frontage foot. The grants are limited to no more than 50 percent of the cost of the improvement project.

Alderman Jane Grover, 7th Ward, said that despite the difficulty measuring the impact, she considers the program "another took in the toolbox" that the city should have — especially because it is being used in a lot of other communities.

Alderman Ann Rainey, 8th Ward, said the program "does so much for the morale of  business owners" — even ones who don't get the grants themselves, but see neighboring stores being spruced up.

But Alderman Judy Fiske, 1st Ward, said she believed the program should be limited to improvements that are typically the responsibility of the business-owner tenant in a builting — not the landlord.

The city shouldn't be paying for building maintenance, she argued.

Fiske also suggested the city should do more outreach to businesses with ugly buildings.

"Some are in desperate need," she said, "but never apply," offering as an example the building on the northeast corner of Davis Street and Maple Avenue that houses the Davis Pantry and other shops.

"A little education, without any money, actually goes a long way," Fiske suggested.

Griffin said that 19 businesses had been approved for the facade grants over the past 19 months.

Ten of the projects have been completed, six are still in process and three have been withdrawn.

The committee Wednesday night recommended approval for a $8,520 grant to Found Restaurant to install folding door-windows in a building at 1631 Chicago Ave. where it plans to open this fall.

And it approved part of a request from Minasian Rug Company at 1244 Chicago Ave. At Fiske's request, the committee dropped funding for painting the building, but approved funds for new awnings.

Those requests now go to the full City Council for action.

The committee took no action Wednesday night on possible revisions to the façade program.