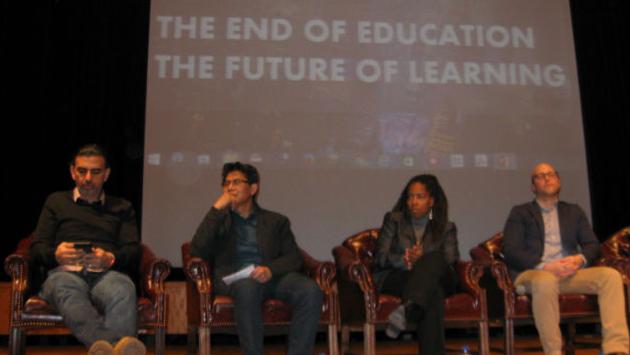 Asking a young person what they plan to do when they grow up is the wrong question to ask, a Google executive told an Evanston audience Wednesday night.

Instead, you should ask what problem they are interested in helping to solve, recommended Jamie Casap, Google’s Chief Education Evangelist.

Casap was one of five education specialists to appear on a panel on “The End of Education, the Future of Learning,” sponsored by the Family Action Network (FAN).

The session drew about 200 attendees, mostly parents and teachers, to the Evanston Township High School auditorium, where they were asked to submit their own ideas for consideration by the organization.

The other four panelists included Sam Chaltain of Wonder, By Design; Liz Gerber of Design for America and Northwestern University; Michael Kosko of the Al Raby School for Community and Environment; and Nicole Pinkard of the Digital Youth Network and DePaul University.

The moderators were Trung Le and Christian Long of Wonder, By Design.

The panel’s principal message was that technology is posing a huge challenge to the educational establishment today that will require new thinking about the way the nation’s kids are educated.

Casap, the father of three whose ages range from 18 months to 23 years, noted that Google did not exist when he graduated from college and that young people today need to become adept at problem-solving and at collaborating with others to prepare for a future that cannot be imagined today.

Other panelists said that the schools today rely too much on individual projects, when success in the new environment comes from those who come up with an idea that is enhanced through collaboration with others.

When today’s older generations were in school, they noted, the teacher dispensed facts, and the students took notes and were judged on how well they repeated those facts on tests.

Today’s students, on the other hand, are adept at finding facts on the internet as needed, and what they must learn is how to work with others to convert those facts into solutions for problems.

A question arose as to whether parents today should set aside large sums to finance a college education for their offspring.

Casap noted that at Google, a college degree is not required. Nevertheless, he added, parents should be advised to set aside funds for learning, which may or may not be at college. That learning budget may also be spent on travel, for internships, or for acquiring specific skills.

The next program in Evanston will be held at 7:30 p.m. on Friday, Feb. 26, at ETHS, with U.S. Sen. Cory Booker (D, N.J.), in a discussion of his book, “United: Thoughts on Finding Common Ground and Advancing the Common Good.”

Details of these programs can be found on the FAN website.

A TED Talk by Jamie Casap