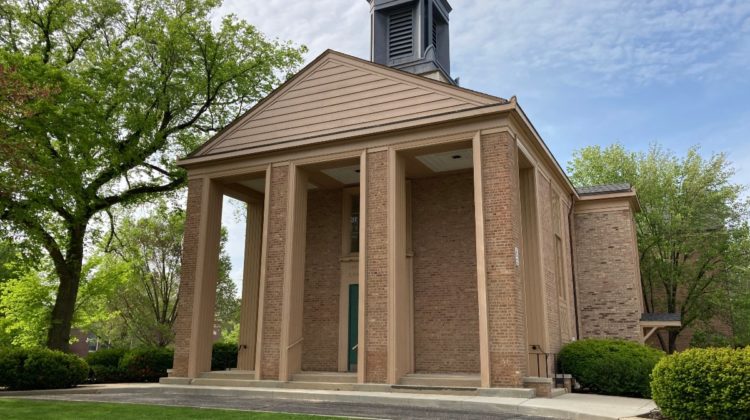 Despite a plea from the Church not to do so, Evanston’s Preservation Commission voted 7-0 Monday night to recommend landmark status for the Second Church of Christ, Scientist.

The final landmark decision for the 1946-vintage building at 2715 Hurd Ave. in Northwest Evanston is now up to City Council.

Bernard Citron, attorney for the Church and also a former architect, told the preservation panel that the building, which was supposedly designed by famed Evanston architect Lawrence Perkins, does not have enough historic significance to merit landmarking.

“Not every building done by a great architect deserves to be landmarked,” Citron said, “just because their name is on it.”

Once a building is declared a landmark, it is much more difficult for the owner to either modify or tear down the structure. The Church, which has dwindled from 400 members when the building opened to only 40 now, has been looking to sell the property.

The Church’s major argument, however, is that whether the building has historic significance or not, there is no firm proof that Lawrence Perkins, who died in 1997, actually was the primary architect.

A current manager with Perkins’ firm has told the Preservation Commission that while Perkins would have been part of a design group for the Christian Science Church, he also would have been the “team leader for sure … with final say on all aspects of design.”

However, Citron said there is still no specific documentation which proves that contention.

“There is a lot of presumption, or maybe wishes,” Citron noted, “but there is nothing in the record that would show that Larry Perkins designed this building.”

For example, Citron stated that in a lengthy interview Perkins gave before his death, Perkins never once mentioned the Second Church of Christ as something he designed.

City staff has suggested the Second Church of Christ may have been the only Church where Perkins, who specialized in schools, was the designer. But Citron argued that “Perkins would have said so” in the long interview if this was indeed the only church he did in his career.

Citron also noted that no one on the Commission or on city staff ever suggested landmarking the Church until a neighbor across the street, who had previously objected to a different use for the site, nominated the church for landmark status.

Tuesday’s Preservation Commission vote was the second of two required in the landmarking process. The first vote, also unanimous, was in May.

Commission members and City Planner Cade Sterling have said there is enough evidence to state that Lawrence Perkins did design the building, and the structure has architectural significance.

Church officials are particularly concerned that the aging structure will become a financial hardship on the small congregation if the building is landmarked, making it much more difficult to sell.

Preservation chair Mark Simon noted that his panel cannot include economic impact when recommending for or against landmark status, only their opinion of the historic nature of the building and the architect.

However, City Council can consider financial aspects of landmarking, and the Church will likely make the hardship argument whenever Council votes on the question.