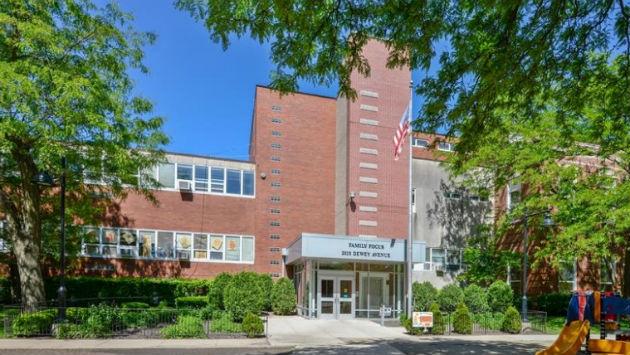 Members of Evanston’s Preservation Commission voted unanimously Tuesday night to landmark the former Foster School building at 2010 Dewey Ave. despite opposition from the non-profit group that now owns the building.

Nine people, most residents of the 5th Ward neighborhood, spoke in favor of the landmark designation, citing the impact of the school and Family Focus, the current owner, have had on the community.

Among those advocates were Alderman Robin Rue Simmons, 5th Ward, and her predecessor, Delores Holmes.

Rue Simmons said the building had been “a resource and place of refuge and empowerment and encouragement in the community” for her entire life.

She said she “can’t take the trauma that would come with not honoring this building in the way it should be honored.”

Holmes, who for many years was the director of the Family Focus program in Evanston, said the neighborhood around the school “was a very thriving black community when I was growing up.”

But all the landmarks from that era other than Foster School are gone now, Holmes said, as the neighborhood has transitioned to be “no longer predominantly black, very integrated and diverse now.”

An image of the original Foster School building.

Nothing remains of the original Foster School building, constructed in 1905. It was destroyed by a fire in 1958 that one of Tuesday night’s speakers, Bennett Johnson, said had been set by “two of my friends,” now dead, who had hoped to force integration of Evanston’s schools by destroying the segregated Foster building.

Additions from 1926 and 1931 survived the fire, and the original structure was replaced by a building of mid-century modern design in 1961.

Subsequent additions and renovations have further altered the design and appearance of the building, and many commissioners appeared to agree with Family Focus representatives that it fails to meet landmark standards for its architecture.

They suggested that the commission’s final report should indicate a desire more more than the usual flexibility about future modifications to the building and that they were primarily recognizing its historical associations in proposing the landmark designation.

A final vote on that report is scheduled for the panel’s September meeting. After that the recommendation will go to the City Council for final action.

Family Focus CEO Merri Ex said the building has been a drain on the group’s resources for years and that they cannot afford capital expenditures needed to upgrade the building that are estimated to cost as much as $3 million.

They’ve put the building on the market and fear that the landmark designation will scare away potential buyers.

Only about 40 percent of the building is now occupied and the rent Family Focus has charged the other non-profit tenants has failed to cover the building’s operating costs.

Ex said Family Focus, which has six other centers around the metro area, all in rented space, plans to continue to operate in Evanston from rented quarters once the building is sold.

Community activists who have proposed forming a new entity to purchase the building that would continue to rent it to social welfare groups, have so far failed to demonstrate that they have the financial resources to purchase the property or to develop a financial model to make its operation self-sustaining.