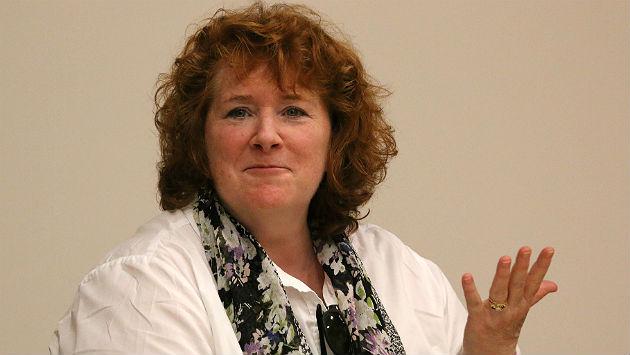 Members of a panel organized to discuss a lobbyist registration ordinance said they’re not sure whether Evanston needs one.

Addressing just over a dozen people at the event sponsored by City Clerk Devon Reid in the Parasol Room Wednesday night, L.J. Ellul, a member of the city’s Board of Ethics, said, “I’m not going to say yes or no, but I think we should gather information to understand what would make sense for us.”

An audience member takes notes during the meeting.

Board of Ethics Chair Jennifer Billingsly said a lot of government activity in Evanston happens through committees, so there is a lot of public disclosure that happens during the process of adopting new ordinances. “You couldn’t compare it to the process in Chicago,” she said.

Steve Berlin, the executive director of the Chicago Board of Ethics, said 756 people currently are registered as lobbyists under Chicago’s ordinance.

Scaling the lobbyist count based on population alone, that would suggest 21 people might register as lobbyists in Evanston, were the city to adopt a similar ordinance.

Berlin said many big cities have lobbyist registration ordinances, as well as just about all 50 states. “The basic purpose is to assure that citizens have access to accurate information about who’s influencing government officials.”

In addition to paying a $350 annual fee, lobbyists in Chicago have to file disclosure reports about what city officials they meet with. The ethics board in Chicago, Berlin said, has a staff of eight people and an operating budget of $880,000. It covers nearly half of its budget from registration fees.

Under Chicago’s current law, he added, non-profit organizations like universities are not required to register, although several universities, including Northwestern, have registered employees as lobbyists. Chicago’s new mayor, Lori Lightfoot, has proposed changes to the Chicago ordinance that would require non-profits to register their lobbyists.

A lobbying ordinance, he said, won’t necessarily make the substance of closed door conversations available to the public — but it would at least make the topic discussed available.

Local activist Clare Kelly pushed last year for Evanston to adopt a lobbyist registration ordinance, but the idea was not embraced by the City Council.