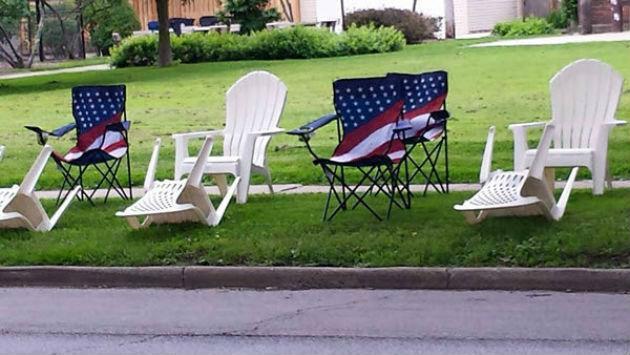 The head of Evanston’s Equity and Empowerment Commission Thursday called for repeal of a city ordinance that lets people put chairs and blankets on the public parkway on Central Street three days ahead of the 4th of July parade.

Although the city code provision, section 7-2-9 (B), doesn’t specify who can put items on the parkway, Grover said that, in effect, it lets people who live nearby “claim their spot on public land to the exclusion, pretty much, of anybody who doesn’t live within a couple blocks of Central Street.”

Grover, who formerly represented the eastern reaches of Central Street as 7th Ward alderman, added, “So can we, you know, recommend a policy to outlaw anybody staking a claim to public space?”

Grover also suggested that perhaps the parade, which is sponsored by the non-profit Evanston 4th of July Association, should be moved, so it’s not always on Central Street.

A member of the audience suggested it should be on Emerson Street instead, which led Alderman Robin Rue Simmons, 5th Ward, to mention that there are plans for a Juneteenth parade next year, to mark the June 19, 1865, end of slavery in Texas. That parade is planned for Dodge Avenue from Simpson Street to Evanston Township High School.

The commission took no immediate action on Grover’s suggestion.