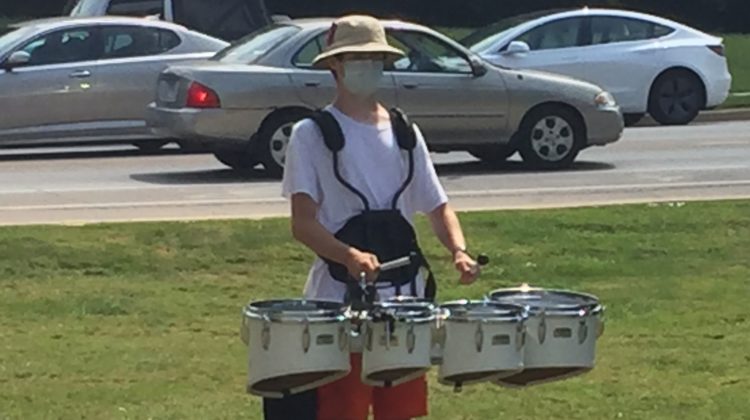 Marching band can be a life-changing experience. That may seem a bit much to a non-musician, but if you’re a band member, or the parent of a band member, it can be the absolute truth.

Half a dozen Evanston Township High School marching band parents and band members pleaded today with the District 202 School Board to let the band continue this fall.

With no Illinois high school football due to COVID-19 restrictions, there will be no halftime shows, and no band competitions. So, no marching band.

One parent, in an e-mailed letter read during the Board’s virtual meeting this morning, said marching band means so much to her daughter that cancellation “brought devastation and sadness to her soul.”

Incoming sophomore Katie Drew wrote, “Band last year was probably the most fun I’ve had in my life.” Thanks to band camp the past couple of weeks, Katie said “I have smiled more than any time in the past five months.” The chance of marching in the fall “was the last thread of normalcy I was holding onto,” Katie explained. Cancellation meant she was “shattered.”

The parents and musicians asked if some sports, such as golf and girls’ tennis are allowed this fall, why not a socially-distanced marching band. Parent Molly Martin said “banning all arts is the easy way out,” and urged the board to “use a scalpel instead of a hatchet” in deciding which programs can continue.

Board members understood what the marching Wildkits mean to the winds, brass, and percussion who make up the band. “I played in the marching band,” said Board Member Gretchen Livingston. “I played the clarinet. I loved it. I’m so sympathetic with these students for losing this opportunity,” Livingston added.

But sympathy did not change any votes. As expected, the Board gave final approval for all-remote learning this fall, without a marching band. All activities will be virtual, except for the handful of sports allowed by Governor J.B. Pritzker.

“We had decided not to have any fall sports,” explained Superintendent Eric Witherspoon. ETHS only put back girls’ and boys’ golf, cross country, and girls’ tennis after the governor’s decision. There will be band and orchestra classes, but they will be virtual, on the computer.

“I think we’re in for a very, very difficult fall,” Witherspoon said. While COVID case numbers in Evanston are relatively low, the superintendent said, “We do not live in a bubble.” The virus is spreading nationwide, and, he said “I don’t want us to be the next school to get a surge” of COVID-19.

Football has been moved to the spring, medical conditions permitting. The plan, Witherspoon said, is to bring marching band back then as well. The newly modified spring season, if it does happen, begins mid- February. That’s twenty-degree weather time in Illinois. And as any band member will tell you, trying to march and play with the horn almost frozen to your lips is not easy.

But also, as any band member will also tell you, they can’t wait to get out there.