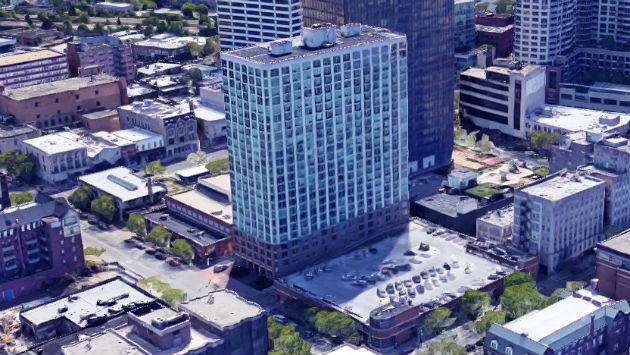 The 24-story Park Evanston apartment tower at 1630 Chicago Ave. in Evanston has been sold for $127 million.

The sale price, shown in county Recorder of Deeds records, pegs the value of the building’s 283 units at nearly $449,000 each — before subtracting the value of the ground-floor retail space now occupied by Whole Foods, Peet’s Coffee and other shops.

Crain’s Chicago Business says it’s the highest sale price on a per-building and per-unit basis for a suburban Chicago multifamily property this year.

Four years ago the 175-unit 1717 Ridge building was sold for $70 million or $400,000 per unit — which at the time was described as the highest price per unit ever paid for a suburban Chicago rental property.

The Park Evanston had been bought by TIAA-CREF, now a part of TH Real Estate, for $101 million in 2008 from the John Buck Company, which completed construction of the building in 1998.

The new buyer is a unit of the New York Life Insurance Company.

New York Life reportedly plans to spend as much as $5.7 million to renovate the building’s common areas and apartments.

The CoStar group reports the Park Evanston is 95.8 percent occupied with its average apartment renting for $2.71 per square foot, up four cents, or 1.5 percent, from a year ago.

With several new high-rise apartment buildings proposed in downtown Evanston, and three, including an assisted-living facility, approved and awaiting the start of construction, demand is considered strong, but the increase in supply is seen as a dampening factor on future rent increases.