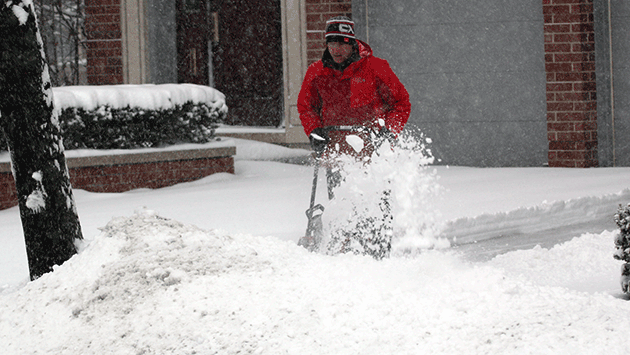 Blizzard conditions are expected to continue until midnight and before the storm ends we could have 16 inches or more of snow on the ground in Evanston. Cleanup, city officials say, will require on-street parking restrictions through Tuesday.

While some residents were out today getting a head start on plowing their driveways and sidewalks, there'll be a lot more of that work to do once the storm is over.

Until then, the National Weather Service says the combination of snow and very strong winds will make travel extraordinarily dangerous.

There's also a risk of minor flooding along the lakeshore and a risk that snow-covered power lines may lead to some power outages.

Assistant Public Works Director James Maiworm says that as of 6 p.m. Evanston had received a foot of snow.

And to help drivers find a way to keep their cars off the streets, the city is offering free parking in its three downtown garages through Tuesday evening.

Maiworm says garbage and recycling collection will occur as scheduled but may be slower than normal due to the quantity of snow in the alleys.

Total city-wide cleanup from the storm will likely continue for the rest of the week, Maiworm says, and additional parking restriction days may be required to get that work done.

The Northwestern University Library and Norris University Center closed early, at 6 p.m. today and the university said its SafeRide service would not operate tonight. The Evanston Loop and Campus Loop shuttle bus routes are operating with the last departures at 11:30 p.m.