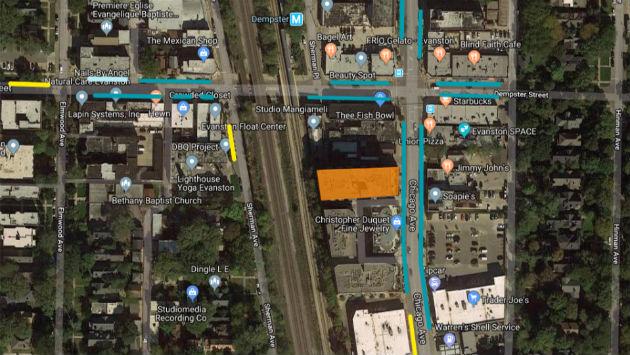 Some aldermen criticized the latest proposals from city staff as being too complicated.

The annotated map above, prepared by city staff from a Google Maps image, shows what the new hourly-rate paid parking options would be in the shopping district around Dempster Street and Chicago Avenue:

Still other permutations would would apply in other areas. For example, in the north end of downtown, as shown on the map above:

The new hourly parking limits will be up for final approval at the Council’s next meeting on May 13.

The more consistent enforcement has led to complaints from merchants and shoppers that they are driving business away from local shops. They also create hardships for experiential businesses — like ones offering classes — that typically have customers in their shops for longer than the current two-hour parking limit.

Alderman Cicely Fleming, 9th Ward, said even with the maps, it’s not very clear what the new limits would be.

“We need to be very clear on signage, and maybe give warning tickets,” Fleming added.

Alderman Melissa Wynne, 3rd Ward, said merchants and customers find the city’s zone system, which determines how far people need to move their car to be able to legally repark it, very confusing. “We need to get rid of the zones,” Wynne said.

Assistant City Manager Erika Storlie said each zone is just a city block and that she plans to update signage in the future to say “block” instead of “zone.”

City Manager Wally Bobkiewicz said the city could go to four-hour parking everywhere, but that some store employees and commuters might abuse it.

Wynne added that a study showed that the average parking time downtown was less than two hours.

“I’m not sure what the correct solution is, but we need something well thought out and based on the best information possibe,” Suffredin said.

Such a parking study was stripped from this year’s city budget as part of the Council’s budget-balancing efforts last fall.

Bobkiewicz said city staff would return to the Council in 60 days with more detailed proposals for further parking revisions and a proposal for a possible city-wide study.