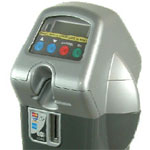 Evanston aldermen asked the City Manager this morning for information on possible alternatives to the manager's plan for a $5 increase in parking fines.

City Manager Wally Bobkiewicz said most parking fines are now $10, although there are a variety of higher fines as well. He project the increase would raise $530,000 in new revenue for the city, helping close a projected $2.4 million budget deficit.

Alderman Don Wilson, 4th Ward, said he'd like to see an analysis of how much could be raised if the city instead increased parking meter rates downtown from 75-cents to $1 an hour.

That rate would match the fee already charged in the city's downtown garages.

But Alderman Judy Fiske, 1st Ward, who owns a pet supply store downtown, said she is concerned about the possible impact of such a rate increase on downtown businesses.

She suggested considering extending the hours for meter enforcement outside of downtown from the current 6 p.m. to 9 p.m. — to match the hours that now apply downtown.

At the City Council's first meeting on the proposed budget unveiled by the manager Oct. 7, none of the aldermen directly questionned his proposal for an 8 percent increase in property taxes.

But they did raise a variety of other issues.

Alderman Coleen Burrus, 9th Ward, asked for a report on how fringe benefit levels for city workers in Evanston compare to levels in other municipalites, at non-profits and in the general business marketplace.

She said staff's estimate that benefits in Evanston average 30 percent of total compensation seemed very high compared to other places, which she said typically have fringe benefit costs of 23 or 24 percent.

Alderman Melissa Wynne, 3rd Ward, raised questions about a staff plan to gradually draw down two special purpose funds set up over a decade ago.

The compensated absences fund was established to cover costs when long-time employees who had stored up unused vacation days retired. And the IMRF reserve fund was intended to cover sudden variations in payments the city might owe to the state municipal employees retirement fund.

But, Marty Lyons, the assistant city manager, said the city has neither added money to nor taken money from either of those funds for at least the past five years.

Bobkiewicz now is proposing to gradually close out those funds over the next five years, adding about $500,000 in spendable revenue to the city's budget in each of those years.

Wynne voiced concern that that practice seemed to be a variation on using one-time revenue to meet continuing expenses.

But staff explained that the city has renegotiated employee contracts to reduce the amount of vacation time employees can bank, and has also found that new, younger employees — especially in the police and fire departments — are more likely than previous cohorts to choose to use all their vacation time.

That, combined with the city's experience in recent years of being able to make the IMRF and compensated absence payments from the general fund each year, persuaded Bobkiewicz that those funds are no longer needed.

Mayor Elizabeth Tisdahl suggested the city should look at increasing the fee for having a full-size, 95-gallon trash container as a way of encouraging more residents to switch to the smaller, 65-gallon ones and to recycle more — which would reduce landfill charges to the city for disposing of the trash.

That cost contributes to what Lyons said is expected to be a $1.8 million deficit in the solid waste fund next year, though previous fee changes and increase in the share of trash-hauling work that's contracted out have reduced the subsidy amount from $3 million in the recent past.

Alderman Ann Rainey, 8th Ward, asked for a memo from the legal department on whether residents could be legally required to recycle — a move that might be a precursor to creating a system of fines for failing to participate in the recycling program.

The aldermen are scheduled to hold another special meeting on the budget on Oct. 29, at which they'll hear public comment from residents.

They're scheduled to adopt the budget Nov. 28.