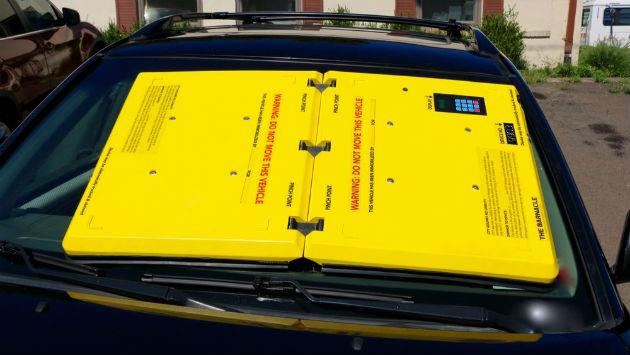 Evanston officials plan to roll out a new tool for immobilizing the cars of parking ticket scofflaws, after aldermen Monday approved cutting the number of tickets required to trigger booting from five to three.

City Manager Wally Bobkiewicz says the city recently purchased three of the new devices, called The Barnacle. They attach to windshields with giant suction cups, and the manufacturer, a company called Ideas That Stick, says they can only be released when car owners enter a special pin code they get when they pay off their overdue tickets.

Bobkiewicz says the new system should eliminate the cost to the city of having a tow truck driver place a traditional Denver Boot on one of the car’s wheels. 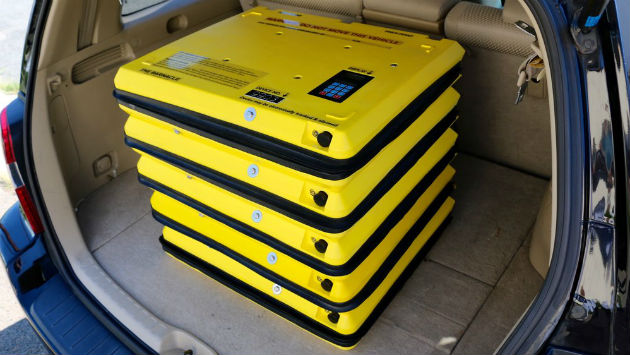 A stack of Barnacles, ready to be deployed. (Images from barnacleparking.com.)

The Barnacle also includes a motion sensor alarm in case somebody tries to drive off with stuck to the windshield and GPS tracking capability in case the driver fails to return the device to the city once it’s unlocked.

Aldermen approved the cut in the number of tickets required to trigger booting on an 8-1 vote after a motion by Alderman Peter Braithwaite, 2nd Ward, to phase the change in over a two year period — cutting the limit to four tickets in 2018 and three in 2019 — failed.

A video from Tech Insider showing how The Barnacle works.

Braithwaite said he throught the change should be more gradual but Bobkiewicz said he’d prefer to not have to run two different promotional campaigns announcing the changes.

Other aldermen said the change to a three-ticket limit would actually benefit drivers — encouraging them to pay up before the total cost of the overdue fines and penalties rose to an unmanageable amount.