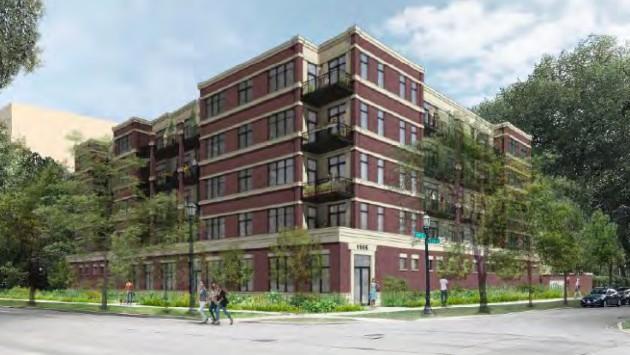 Neighbors who turned out for a meeting to discuss plans for a five-story, 68-unit apartment building at 1555 Ridge Ave. in Evanston voiced fears the development will aggravate what they said is an already severe shortage of on-street parking in the neighborhood on the western edge of downtown.

Developer Thomas Meador of Michigan Avenue Real Estate Group says the planned development will include 61 parking spaces, four more than are required under the city’s transit-oriented-development rules for buildings within a quarter mile of rail transit stops.

“There aren’t enough spaces for the units you have now in the neighborhood,” one woman, who lives on Lake Street, said.

A woman who said she lives at 1100 Grove added that parking in the area now “is a mess.”

Alderman Don Wilson, 4th Ward, said that the addition of more active restaurant uses on Davis Street in recent years has created more parking demand, and he suggested that one solution could be to eliminate the current ban on parking on Lake Street, a block south of the development site.

Parking is now banned on both sides of Lake, although it is permitted on one side in one block for weekend church services. Allowing parking on one side on all days could relieve some of the parking congestion, Wilson suggested.

The site for the development now is a surface parking lot owned by the owners of the 1570 Oak Ave. building, who recently reached an agreement with the city to lease spaces in the Maple Avenue garage for that building’s tenants.

The proposed development would include three affordable units on site and pay the city’s required fee in lieu for an additional three units.

The new building would be 56 feet tall, substantially below the 85 foot height limit for the property’s R6 zone.

The developer is asking for a variance to reduce the side yard required on the north end of the site, which is adjacent to a driveway for the building next door.

Meador says the project will offer luxury rental apartments with on-site management. He says it will have a minimum of elaborate amenities — no swimming pool, for example. But he plans to use top-of-the-line finishes and provide balconies for each of the units.

The building will have four levels of apartments atop a ground floor garage and include 8 studio, 20 one-bedroom and 40 two-bedroom units.

The plans will require review by the city’s Design and Project Review Committee and the Plan Commission before they reach the City Council for a final approval vote. A schedule for those public meetings has not yet been set.