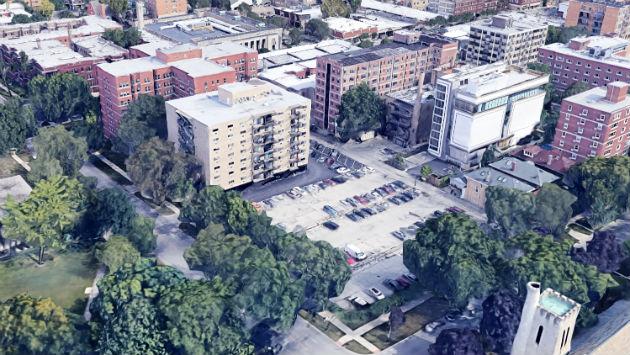 Evanston’s Design and Project Review Committee recommended approval Wednesday of a parking variance that would permit redevelopment of a surface parking lot at 1555 Ridge Ave.

The lot has been owned since 1984 by the owners of the eight-story apartment building across the alley at 1570 Oak Ave.

Al Belmonte, of Wesley Realty Group, which manages the properties, told the committee that the requirement that the 1555 Ridge lot be used to provide parking for the 1570 Oak building dates to years before 1984 when both properties were owned by Northwestern University.

At that point, he said, the building was used as a dorm, and the lot was intended to provide parking for both the students living there and to help reduce a shortage of parking on campus.

Belmonte says that of the nearly 100 spaces in the lot, 32 are currently used by residents of the 1570 Oak building and 34 are leased to a range of other users, including workers at the nearby downtown post office, owners of condos in the building at 1567 Ridge, the Margarita European Inn at 1566 Oak and some other businesses.

He said the spaces are leased for just $40 a month and don’t generate enough revenue to cover maintenance costs for the lot.

The committee recommended approval of Belmonte’s proposal that the 1570 Oak building be permitted to lease 57 spaces in the city’s Maple Avenue garage as a substitute for the parking on the 1555 Ridge lot.

City staff said there is ample capacity in the garage to accommodate the additional demand, but noted that the charge for a monthly permit at the garage is $110 — and could rise in the future.

Belmonte said Wesley Realty hadn’t been marketing the lot for sale but was recently approached by a developer interested in the property and now has an agreement to sell it, subject to removing the requirement that it be used as parking for the 1570 Oak building.

Substitution of off-site parking is generally allowed in transit-oriented districts in the city, Scott Mangum, the city’s planning and zoning division manager, said, but under the zoning code a variance is required if the proposed off-site parking is more than 1,000 feet from the building.

“It’s not out of the realm of possiblity,” Mangum said, “that people could walk the couple of blocks” from 1570 Oak to the garage.

The proposal now goes to the city’s Zoning Board of Appeals.

Belmonte said he doesn’t know what sort of new building the potential purchaser plans for the parking lot site.

The lot is zoned R6, which under the city zoning code would typically permit a building up to 85 feet tall. The lot is also large enough to be treated as a planned development, which could lead to approval of some additional height.