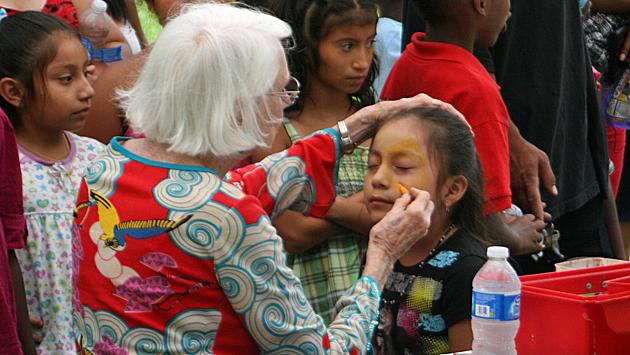 Evanston’s Parks, Recreation and Community Services Department would spend twice as much as it receives in revenue next year under the the city’s baseline budget projections, and cuts proposed by the city manager would make only a slight improvement in that performance.

The baseline budget calls for spending $12.55 million on parks on projected revenue of $6.27 million. City Manager Wally Bobkiewicz’s proposed cuts would close about $415,000 of that $6.28 million gap.

But in a budget memo to aldermen the city’s parks director, Lawrence Hemingway, says, “The fact that we generate 50 percent of our budget puts the department above the upper quartile of similar departments based on national professional standards.”

The city now runs a variety one-shot and recurring festival events and loses money on most of them.

The only profitable one is the Zombie Scramble, which Hemingway says generated $11,500 in participant registration fees and sponsorships and had expenses of $8,100. With a projected attendance of 740 people, that worked out to a gain of $4.59 per participant.

Looking at it from the same perspective, the biggest loser is the annual Community Picnic, which costs $15,689 and generated only $1,725 in sponsorship revenue this year. With 800 attendees, the loss worked out to $17.46 per participant.

Bobkiewicz is proposing cancelling the World Art & Music Festival for next year. He’s projecting a $55,000 savings from doing that, although Hemingway says the festival generated $32,841 in revenue this year against expenses of $58,380. Using Hemingway’s numbers, with about 7,500 visitors, the festival lost about $3.41 per visitor this year.

Hemingway didn’t offer attendance figures for the Fleetwood-Jourdain Theatre program, but in response to a question from aldermen he said it had expenses of $140,683 and revenue of $28,418.

The budget memos also show a wide variation of the revenue generated and expenses incurred by the city’s different recreation centers.

None of these budget figures consider the long-term capital costs of making major repairs to or replacing the existing facilities.

Evanston aldermen are scheduled to have their first discussion of the city’s proposed 2019 budget, and how to close a nearly $7.4 million budget gap, at their meeting tonight.