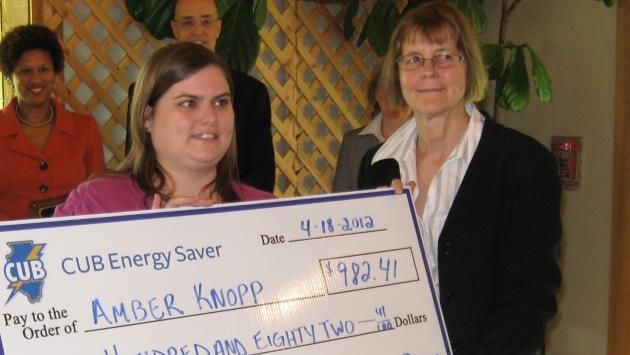 Amber Knopp, a patient care technician in the emergency room at Evanston Hospital, was awarded a check Wednesday for $982.41 for saving electricity in a yearlong competition among the seven largest employers in Evanston.

Knopp was one of 820 families represented on the NorthShore team to join CUB Energy Saver, cutting electric bills by 135,037 kilowatt hours (kWh) and $18,230. Some 38 percent of NorthShore’s workforce participated, topping all other competitors. Knopp’s winnings represented a year’s worth of electricity.

Also cited at a news conference Wednesday at the Evanston Ecology Center was Evanston Township High School District 202, which enjoyed the largest per-person savings, cutting electric bills by an average of 3.15 percent, for a total savings of $2,425 and 17,967 kWh. Mary Spoden of the ETHS team, who was not present, was also the winner of a year's worth of electricity.

The other five employers in the competition were the City of Evanston, Northwestern University, Evanston/Skokie School District 65, Rotary International, and Saint Francis Hospital.

Evanston Mayor Elizabeth Tisdahl, who presented the awards, regretted that her team, the City of Evanston, was not one of the top winners, but noted that “the best thing about this competition is that there are no losers. Everyone is saving energy and money.”

Overall, families in the competition cut energy usage by a total of $39,487 and 292,495 kWh. That’s enough energy to equal about 30 years of electric bills for the average Illinois home, according to Jim Chilsen, director of communications for the Citizens Utility Board.

Chilsen announced that, in honor of Earth Month, one in 10 consumers who join the free CUBenergysaver.com service before June 1 will have their April electricity bill picked up by Efficiency 2.0, one of the makers of CUB Energy Saver, up to a maximum of $150.

Chilsen noted that the service applies to all residential electric customers, including those who have signed up for alternative electric suppliers.

CUB is a nonprofit utility watchdog organization, created by the Illinois Legislature in 1984 to represent the interests of residential and small-business utility customers.