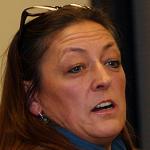 The team behind the Peckish Pig, the planned Howard Street brew pub that had hoped to open in December, now say they'll get it open within a month or so.

In a preview story in DNAInfo.com, Brewmaster Tom Fogarty says he's still waiting on a few more parts from the manufacturer before he'll be able to start turning out a planned 108 gallons of beer every 10 days or so.

Co-owner Debbie Evans says she hopes the new establishment will be part of the turning point to revive Howard Street and she's planning a menu of burgers, salads and a specialty dish of deep-fried ham hocks with a salted-caramel sauce — along with vegan and vegetarian items.

The owners hope eventually to buy the building, at 623 Howard St., from the city, which acquired it in 2011 as part of a economic development plan.