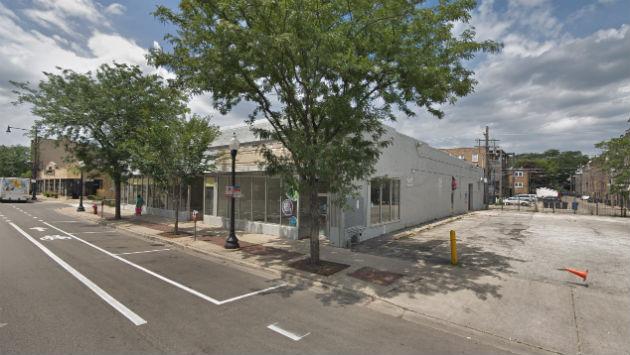 Owners of the Peckish Pig on Howard Street will seek city approval this week for plans to open a new event space called Palmhouse across Callan Avenue from their existing brew pub.

Foiled last year in efforts to turn the former city recycling center on Oakton Street into an event space when the city opted for a competing proposal to turn that property into a climbing gym, Deborah Evans and India Mussell-McKay now hope to open their facility in the vacant former Sherwin-Williams paint store building at 619 Howard.

The plans, from Studio Talo Architecture, call for reconfiguring the storefront facade of the nearly 10,000 square foot building on Howard and creating two event space rooms in the interior — one with a capacity of 890 people, the other capable of holding 433 people.

The plans also call for adding two new large overhead doors off the existing 22-space parking lot to the east of the buiding as well as kitchen and restroom facilities.

The request for a special use permit will be reviewed at the city’s Design and Project Review Committee meeting at 2:30 p.m. Wednesday. It then is scheduled to be heard by the Zoning Board of Appeals next week and will likely reach City Council for a final decision next month.

County records indicate the building was acquired from Sherwin-Williams last May for $467,500 by 619 Howard LLC, an entity controlled by principals of Troutman & Dams LLC, a commercial real estate development firm.

The special use permit application indicates Mohamed Eldibany of 2819 Girard Ave. in Evanston has a contract to purchase the property.