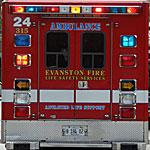 Police say a 60-year-old Evanston woman has died at Evanston Hospital after she was struck by a car last night.

The accident happened about 7 p.m. at the intersection of Lake Street and Oak Avenue, just south of downtown Evanston.

Police say the regional Major Crash Assistance Team and the Evanston police Traffic Bureau are investigating the accident. So far no citations or charges have been issued.

Police Cmdr. Jay Parrott says the driver of the car that hit the victim — a 56-year-old woman from Skokie — told poice she had was traveling eastbound on Lake Street and stopped at the intersection. After a car crossed the intersection northbound on Oak, the driver said, she started up again, but didn't see the pedestrian until the impact.

Parrott says there were no initial indications that the driver was impaired or distracted and that police are attempting to determine whether the pedestrian was in the crosswalk when she was hit.

The victim's identity has not been released, pending notification of relatives.