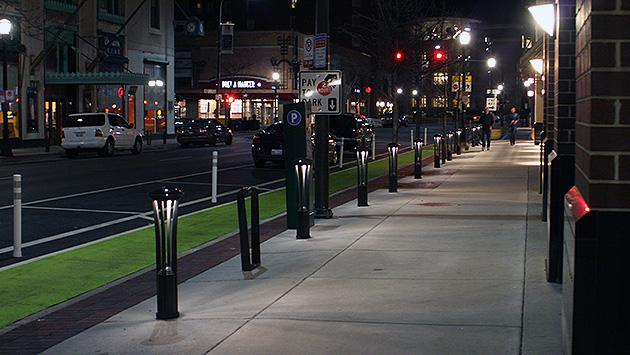 The new pedestrian lights installed along Church Street downtown came under attack from some aldermen Tuesday night as the Evanston City Council debated whether to expand the lighting project to Davis Street.

“I think they add to street clutter, when we’re trying to remove that,” said Alderman Melissa Wynne, 3rd Ward. “And as lights, they’re inadequate, not bright enough so that people can really see the sidewalk.”

“The light seems to be wasted within the structure of the fixture itself,” Wynne added.

But Tendam, a professional designer, said the look of the lights doesn’t fit the neighborhood.

“The design references are to an Art Deco period, Tendam said, “which is kind of inappropriate given the character of the streets.”

He added that some people interpret the lights as looking very modern — in a George Jetson sort of way.

“On Church Street where there’s more contemporary architecture,” Tendam suggested, the design doesn’t look too out of place, “but this style of street furniture on Davis, or in other neighborhoods where we have more traditional architecture, will look very foreign.”

Public Works Director Suzette Robinson, questionned by Wynne, said the 118 lights installed on Church Street cost about $2,100 each, including wiring and installation.

Wynne suggested that the roughly quarter-million-dollar cost could easily be dropped from the project on Davis.

But Alderman Judy Fiske, 1st Ward, defended the concept of added pedestrian lighting, if not the particular fixtures used.

“We’re trying to get people to feel safe to park in our garages and spend a little time walking around downtown in the evening and also trying to create a safe route to campus, to make NU students feel less isolated going back to campus from downtown,” Fiske said.

“Everyone from students to seniors really appreciates the added light,” Fiske said. “For the most part it does what was intendeed — to light the walkways and create a nicer ambiance.”

“I’ve had a lot of positive feedback about them,” Fiske said. “I agree with the street clutter argument. We were looking at getting rid of the parking meters, but my guess is we will end up with parking meters downtown. But I do think the street lighting is very helpful in helping people feel safer.”

The aldermen voted to hold off on approving the pedestrian lighting and other “street furniture” aspects of the Davis Street repaving project until city staff comes back with additional options for what fixtures to use.

Davis bike plan up for review