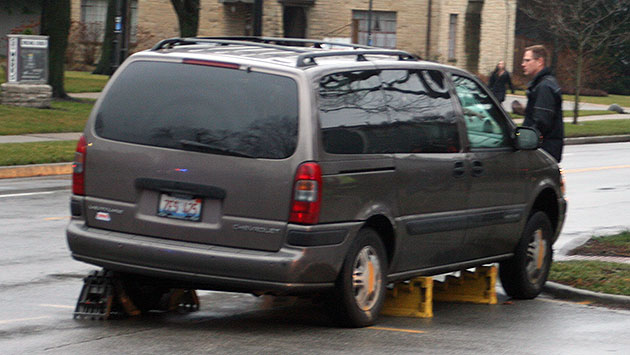 A 5-year-old child heading to Dewey School and his father were struck by a car about 8:45 a.m. today as they crossed Ridge Avenue at Grove Street.

Evanston Fire Chief Greg Klaiber says the child was thrown onto the parkway while the adult was pinned under the front of the minivan.

Klaiber says the man suffered multiple fractures and possible internal injuries but was conscious when paramedics transported him to Evanston Hospital.

The child had a large hematoma on his head, Klaiber says, and was also rushed to the same hospital.

Update: 12:10 p.m.: Police say the father, age 39, is now listed in critical condition and the son is listed in stable condition. The minivan was driven by a 57-year-old Evanston woman. At this time, police say, no citations are expected to be issued.

Klaiber says the accident happened as the two pedestrians were crossing Ridge on the north side of Grove. The impact with the southbound car threw the child onto the parkway on the southwest corner of the intersection and the adult was dragged beneath the car for 30 or 40 feet.

Traffic on Ridge Avenue was blocked off from Church to Lake streets while police investigated the one-car accident. Police said Ridge and Grovve were expected to remained blocked until about noon today.

Top: Equipment used by firefighters to extract the victim from under the car can be seen in this image of the accident scene.