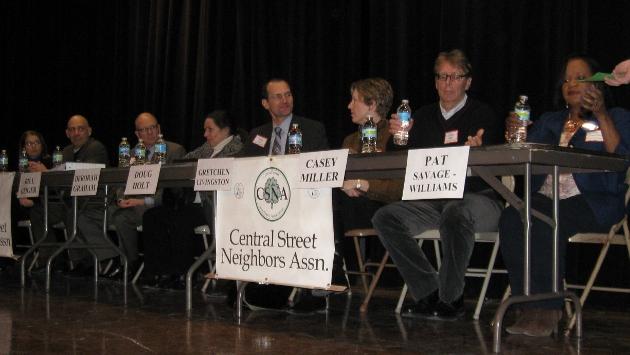 If one were to peruse the reader comments on this website, they’d think that the hiring of a consultant on race relations would be a major issue dividing candidates in the race for the Evanston Township High School District 202 School Board.

That did not appear to be the case at the first confrontation of all eight candidates at a campaign forum sponsored by the Central Street Neighbors at Haven Middle School Wednesday night.

Moderator Jeff Smith asked the candidates for the April 9 election what they thought of hiring the Pacific Education Group (PEG) several years ago by the district to conduct workshops about the effect of race on the teaching of high school students.

Called “courageous conversations,” these workshops were designed to sensitize teachers, administrators, board members, and others about the cultural challenges that affect African-American students at school.

The two incumbents in the race, Deborah Graham and Gretchen Livingston, said the choice to hire PEG at ETHS was not a board decision, but that if it were proposed today, they would vote against it.

Graham noted that PEG training was divisive for the community and that “to foster that kind of divisiveness is a mistake.” Instead, she said, the community should focus on pre-school opportunities for all youngsters.

Livingston said she objected to PEG's “exclusive focus on race” and that she would not hire them again.

Pat Savage-Williams, a school psychologist and coordinator of special education services at New Trier High School’s Northfield campus, admitted to participating in PEG workshops in that north shore community, but said the district where she works is confronted with different racial challenges than Evanston due to its overwhelming white majority population.

In the New Trier environment, however, she found it to be “a tool for difficult conversations.”

Most of the other candidates, while not objecting strongly to the idea of gaining a better understanding of racial issues, were not inclined to support hiring PEG again for District 202.

William Stafford, the chief financial officer of District 202, told Evanston Now that the board approved contracting with PEG on Oct. 13, 2009, and that the vote was unanimous, but that as of December, 2012, the board was winding down its relationship, that it has no current contract with PEG, “and only minor expenses this year that are also phasing out.”

On other issues the candidates expressed admiration for the high school, several of them calling it “transformative” in the lives of its students, but vowed to pursue policies that would enable all students to reach their potential, whether it was preparation for college or for a technical or vocational career.