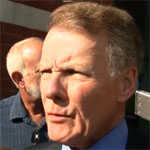 On the eve of a special session of the state legislature to deal with public employee pension reform, State Rep. Daniel Biss of Evanston will host a public forum on the issue tonight in Skokie.

Meanwhile, on Wednesday, hundreds of representatives of public employee unions filled the director's lawn at the Illinois State Fairgrounds and booed Gov. Quinn and chanted "Liar" as he took the stage.

House Speaker Michael Madigan said he is not hopeful that a pension reform package will pass the Illinois General Assembly, which goes into special session Friday, despite an $84 billion gap in funding.

Michael Carigan, president of the Illinois AFL-CIO, said Quinn refuses to honor state workers' collective-bargaining agreements, is trying to reduce pension benefits for workers, and wants to lay off thousands of them.

And a catastrophic pension-fund collapse may be what  Illinoisans need to understand the urgency of pension reform, House Republican leader Rep. Tom Cross said.

“I think folks in this state and around the country don’t think it could happen to them. They say, ‘That happens in Europe. That happens in faraway places. That’s not going to happen here,’” said Cross of Oswego.

“Well, when you’re at $130 billion of unfunded liability, I’d say it’s pretty real. And I think perhaps until something dramatic happens, we may not do anything in a real substantive way. It’s a difficult conversation, but it’s not one that’s going to go away.”

Jayette Bolinski and Ben Yount of Illinois Watchdog contributed reporting for this story.

Madigan says discord between state and unions is 'natural conflict.'