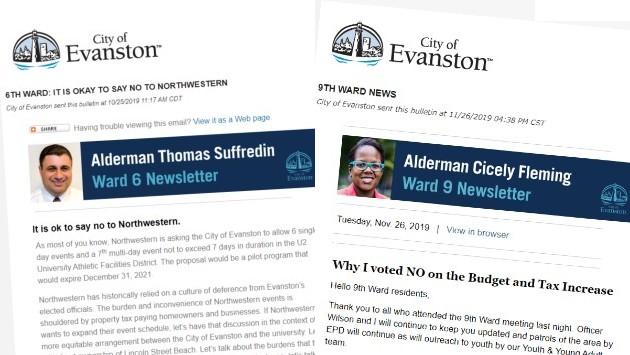 Evanston aldermen are scheduled Tuesday to discuss whether to ban themselves from expressing their own opinions in city-produced email newsletters to their constituents.

In a memo to the City Council’s Rules Committee responding to a referral from Alderman Cicely Fleming, 9th Ward, Assistant City Attorney Alexandra Ruggie suggests that personal opinions of elected officals should be barred from the newsletters.

Ruggie says the personal views, when included in newsletters that contain the city logo and are produced using city staff time and the city’s email domain, give “the appearance and legal effect that these personal opinions are shared by the City” and “have the potential for liability for the City if the opinions pertain to isues that go to future litigation.”

She suggests that elected officials who wish to share their personal opinions about city business with their constituents should do so in their own capacity, “without the City’s logo, without use of City staff time and without utilizing the City’s email domain.”

For the most part ward newsletters have had anodyne content — mostly reprinting city news releases and providing meeting announcements.

But on a few occasions recently some aldermen have injected their own views into their newsletters — as when Alderman Tom Suffredin, 6th Ward, and Fleming each explained why they voted against approving the city budget and when Suffredin urged rejection of a zoning change to permit commercial events at Welsh-Ryan Arena.

Ruggie didn’t provide a response to the other question Fleming posed, about whether a departing alderman should be able to get a copy of the list of the email addresses of the recipients of their ward newsletter, but said the Council needs to set a policy about that.