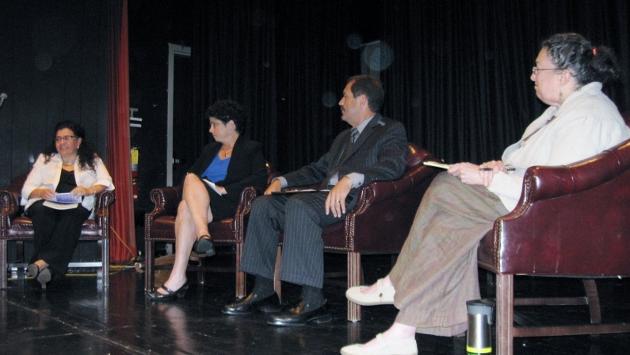 About 25 persons attended a forum in Evanston on immigration reform Wednesday night that painted a grim picture of prospects for significant action in this session of Congress.

Speaking sometimes in English and sometimes in Spanish, the pro-reform panel decried the current situation as one that has a negative impact on the children of undocumented immigrants.

But they noted that the House of Representatives, in particular, was more interested in stemming the tide of immigrants than they were on providing a workable pathway to citizenship, leaving the children, many of whom are American citizens because they were born in this country, to deal with the prospect of one or more of their parents facing deportation.

The forum was the first of several, sponsored by the Democratic Party of Evanston, on current local and national issues. It was held at Evanston Township High School, organizers said, because the school is particularly welcoming to the immigrant community in Evanston.

Moderating the panel was Rachel Heuman, a retired high school teacher of English and English as a second language (ESL).

Garcia contended that the impact on families was the situation that most needs to be fixed as a part of immigration reform.

“Living free of fear that your mother or father may be deported tomorrow is what they have to grapple with,” he said.

Love agreed with that assessment and related a case involving one of her clients whose “children are in college and paralyzed in fear.”

Villa told of a situation in Iowa where both parents were threatened with deportation. As for their children, “what are they going to do with them?”, she asked.

Villa, who has been responsible for opening 10 welcoming centers for immigrants in Illinois, said that a typical response from immigrants when told about services available to them, replied “I don’t want food stamps; I just want to work.”

She said the biggest challenges in providing services to immigrants are “system navigation, cultural sensitivity, and language.”

Without citing specifics, all the panelists agreed that immigration is vital to the economy at both the state and federal levels.

As to the argument that immigrants negatively impact the economy because of their use of social services, Love noted that “immigrants are not eligible for most services.”

In Congress, one bill has passed the Senate and has little chance of success in the House, according to Garcia. But even the Senate-passed measure, he said, “was not comprehensive.”