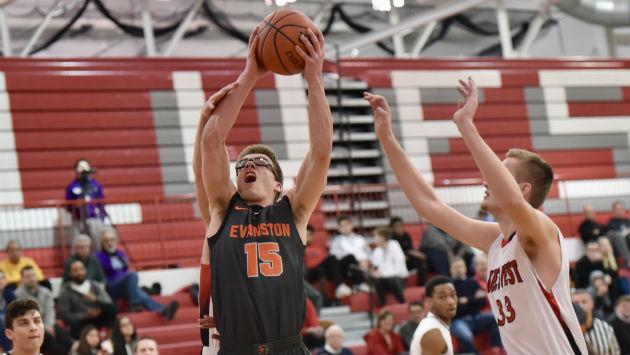 Blake Peters may never be the tallest guy or the quickest guy or the best defender in the starting lineup for Evanston’s basketball team during his high school career.

But that doesn’t mean Peters won’t be one of those guys who fills up a stat sheet —  maybe sooner rather than later.

The 6-foot-1 ETHS sophomore did more than just score a game-high 23 points for the Wildkits as they earned their first conference road victory Friday night at Niles West, pulling away from a slim 3-point advantage at halftime for a 63-51 triumph.

Peters also contributed a game-high 6 rebounds, 3 steals and a couple of assists despite only playing three quarters due to foul trouble. With the win, Evanston improved to 16-3 on the season and 3-1 in Central Suburban League South division play.

Lance Jones totaled 14 points and Ryan Bost had 11 points to go with his 5 steals for the Wildkits, who limited the hosts to just 21 points in the second half and kept West (6-10 overall) winless in league action.

Peters’ numbers might not seem impressive on paper. But the sophomore’s timing was impeccable, as his all-around effort helped the Kits outscore a fired-up West squad 13-8 in the third quarter and enabled them to stretch their lead to double digits.

“Blake impacted the momentum swing at least 3 times in that game, with a key rebound or a steal or deflection, not just shooting the ball,” said Evanston  head coach Mike Ellis. “It was good to see him take our point of emphasis (rebounding) this week to heart, because right now we need more rebounding. We need someone besides Jaylin (Gibson) to make plays in the paint for us.

Peters tossed in 12 points in the opening quarter Friday, but also picked up 2 personal fouls and sat out the entire second quarter as Evanston struggled to a 33-30 halftime edge.

“We had our (individual) evaluations yesterday (from the coaching staff) and even though the other aspects of my game have been solid, rebounding is an area I definitely need to improve on,” Peters said. “I’ll definitely focus on that more the second half of the season, because sometimes that’s more important than 3-pointers. I need to go out and make more plays — one play at a time.

“And even if my shot is falling, like it was tonight, I still have to rebound and play hard on defense.”

Peters has scored 18, 20 and 23 points in his last 3 games and is in the midst of perhaps his best stretch of basketball to date for the Kits, even though he started on the varsity as a freshman. He admitted Friday that his three-quarter shot to beat Maine South that went viral on the Internet — and earned him a trip to the ESPY Awards — last year was “the best thing and the worst thing that could have happened to me.

“It brought a lot of joy to me and to my family, but there was a lot of pressure on me for the second half of the season after that shot,” he said. “After that shot, everyone was watching me specifically to see what I’d do next. So it was really an up and down year for me.”

Three-pointers by Peters and Bost and West’s 3-for-10 shooting as a team opened up a 46-38 lead for the Wildkits after three quarters Friday, and they never led by less than 10 in the final period.

Highlight for the Kits in the final minute and a half was the debut of 6-foot-5 senior Kehinde Adenle, one of the team managers for the first half of the season. Adenle, who moved to Evanston from Africa, was awarded one more semester of eligibility by the Illinois High School Association for the 2018-19 season after they considered the amount of schooling he received before coming to the United States.

The lanky senior missed 2 free throws and a shot from the field despite the best efforts of his teammates to get him on the board.