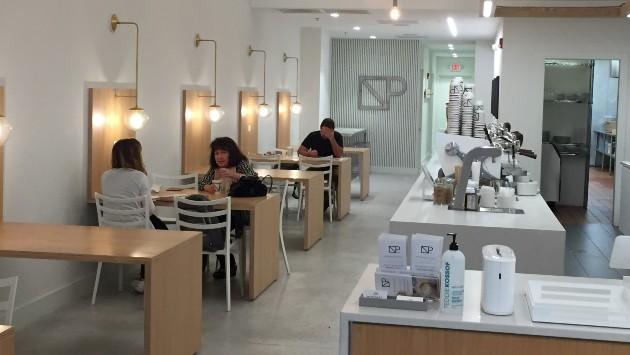 “There’s not a single person in the dining room,” said an employee of the downtown Potbelly Sandwich shop around 12:30 p.m.  That employee, who did not want their name used, said most of the business was still pickup and delivery, which began under Phase 3.

Gov. Pritzker shut all non-essential businesses in mid-March due to the coronavirus pandemic. Those businesses gradually have been permitted to re-open as virus cases and positivity rates have declined.

Restaurants now have to limit capacity based on maintaining sufficient spacing between tables.  At The Barn Steakhouse, manager Mark Loacker tells Evanston Now that means only about 50 indoor customers instead of 225.

Loacker says The Barn has expanded its outdoor serving area, “but there is still a good chunk of people wanting to be super-comfortable in our plush area” inside.

The open sign is lit at the Golden Olympic.

Coronavirus-related closings have hit restaurants with a financial left hook. Managers at some establishments say it may be awhile before even 25 per cent of the tables are filled. For example, at the Golden Olympic on Chicago Avenue, an employee said only a few tables were in use. That worker thought “it will take people a little while” to come back.

Today’s rainy weather didn’t help. It was not exactly pleasant to walk around and look for a place to eat.

But the places which did open were thrilled to see customers. At Newport Coffee on Davis Street, barista Jen Short said “I’ve been in here by myself most days, and it’s nice to have other people in the same room again.” Short said Newport is “taking every precaution we can,” using paper plates and cups, increased cleaning and disinfecting, removing seats and using only every other table to maintain six foot spacing.

Movie theaters and gyms are also allowed to re-open in Phase 4, with capacity limits.

But the Cinemark Century 12 downtown remains closed, with no date yet announced to start up the silver screens. Cinemark’s web site does have re-opening schedules for theaters around the country, but for Evanston, it only says “We’re excited and preparing to welcome you back,” but keep checking to find out when.

The site also explains enhanced cleaning and sanitizing procedures. Under the Phase Four guidelines, theaters are limited to 50 customers or 50 per cent of capacity, whichever is less. That limit applies to each screening room, not the theater overall.

Signs of the times at LA Fitness.

It was a slow reopening day for gyms, too, which also have customer capacity limits. At LA Fitness downtown, manager Ethan Velazquez said he could “count the number of patrons with one hand.” However, Velazquez said he expects business to pick up. A few blocks away, the Evanston Athletic Club remained closed. A sign on the door said reopening is scheduled for July 20.

One thing which all business owners seem worried about is what’s happening in places like Arizona, Florida, and Texas — an explosion of coronavirus cases — causing restrictions to be reinstated.

Unlike those states, Illinois has been reopening more gradually, with tougher restrictions along the way.  Gov. Pritzker said new limits could happen here, however, if case numbers start to rise. As the employee who did not want to be named put it, “we don’t want to go backwards.”

Phase 5, where everyone opens with no capacity limits and new health measures in place, seems a long way off. There has to be a vaccine, an effective treatment option, or no new COVID-19 cases over a sustained period. Testing and tracing must be widely available as well.

So for now, Phase 4 is an improvement for businesses. Getting diners inside a restaurant, even at 25 per cent of what used to be, is a start. As Phil Cocco, general manager of the Farmhouse restaurant puts it, “Who the hell would just stick with outside.”