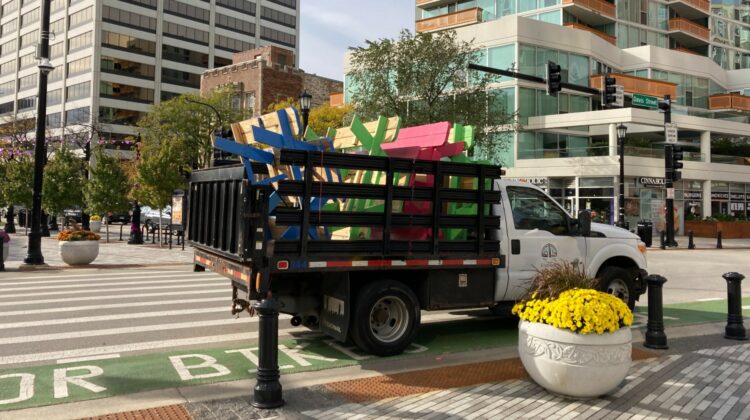 Packing up the picnic tables at Fountain Square on Monday.

TABLES GONE FROM FOUNTAIN SQUARE/NO WORD WHEN FOUNTAIN WILL RETURN

Winter in Evanston is no picnic. And if for some reason you wanted to brave the cold and have a picnic, the tables where you could have sat at Fountain Square are now gone.

The seven colorful tables, and a soft, green artificial turf, were installed at the square during the summer, after the fountain was turned off due to what the city said was faulty work by a contractor.

The turf and tables were removed Monday, because the city needs to winterize the fountain.

But there is still nothing certain about when, or if, the fountain will be ready for 2022.

City spokesperson Patrick Deignan tells Evanston Now that “city staff is working with design consultants to determine the scope and cost of the repairs.”

City leaders have said they will hold the fountain’s contractor responsible for the faulty work, but because of potential litigation, Deignan says the city will have no further comment on the project.

The picnic tables and the green turf were placed at the square by the Downtown Evanston marketing group, in an effort to give people a place to gather and have fun while the fountain was shut down.

“I think the turf and tables were a hit,” says Annie Coakley, Downtown Evanston’s executive director. With students returning to Beacon Academy nearby, and also to Northwestern University, Coakley says the tables were used quite a lot. There were also good crowds on hand on the weekends.

Downtown Evanston also tried having large game boards available in a locker at the square, which was less successful.

However, Coakley says “we hope they will be [used more] next summer when we open up that much earlier, and have more daytime population and foot traffic.”

At this point, however, it’s not known if people playing board games and enjoying a picnic will be sitting on top of a non-functioning fountain once again, or if the tables will be moved so spray from a repaired fountain will not get everybody wet.