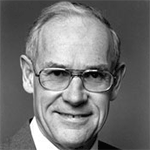 Robert L. Letsinger, who played a critical role in developing DNA synthesis and taught chemistry at Northwestern University for nearly a half century, died May 26 at his home in Seattle. He was 92.

Letsinger was a pioneer in creating the solid support concept for organic synthesis and in developing the rapid and efficient method for chemical synthesis of DNA used throughout the world today. He was known among students and colleagues for a respectful collaborative approach to teaching and a willingness to take risks in unexplored areas of research.

After retiring from teaching, Letsinger co-founded the biotech company Nanosphere, which uses his DNA research for the development of medical diagnostic tools.

“Bob holds a unique place in Northwestern history,” said Chad A. Mirkin, the George B. Rathmann Professor of Chemistry in Northwestern’s Weinberg College of Arts and Sciences and co-founder with Letsinger of Nanosphere. “His work impacted an entire industry and is a cornerstone of the modern fields of molecular diagnostics and genomics. On the personal side, he made science and learning enjoyable for all who worked with him.”

Letsinger joined the University’s chemistry department faculty in 1946. He spent the next 50 years fulfilling a productive, innovative academic career, including serving as chair of the department from 1972 to 1975. Letsinger retired from teaching in 1991, when he became a professor emeritus of chemistry.

His research focused on developing solid phase synthetic methods for rapid and convenient synthesis of oligonucleotides (units of genes), which provided a foundation for new approaches to medical research. On the basis of these methods, he served on several medical advisory boards, including Gilead Sciences as a consultant on HIV research.

Letsinger returned to Northwestern last September and was honored at a reception co-hosted by the chemistry department and the International Institute of Nanotechnology.

“Bob was a giant of the department in many ways beyond his spectacular research contributions,” said Peter C. Stair, chemistry department chair at Northwestern and the John G. Searle Professor of Chemistry.

“Bob was amazingly humble and self-deprecating for such a brilliant man,” Stair said. “He had a great, subtle sense of humor. He was a regular at the chemistry faculty lunches, where he engaged in the back-and-forth discussions that ranged from sports to politics and occasionally to science. One of my great regrets is having begged off from a scheduled golf game with Bob and [the late Northwestern chemistry professor] Fred Basolo.”

Letsinger received numerous awards during his long career. He was elected to the National Academy of Sciences in 1986 for “pioneering research…that provides the base for the synthesis of gene fragments that has facilitated rapid development of molecular biology” and to the American Academy of Arts and Sciences in 1988.

Other honors include the first Guggenheim Fellow award for research in chemistry (1956), the Lewis S. Rosenstiel Award for Distinguished Work in Basic Medical Research (1985), the first Northwestern University Alumni Association Excellence in Teaching Award (1987), the Humboldt U.S. Senior Scientist Award (1988), an honorary doctorate in science from Acadia University in Canada (1993) and the B.F. Goodrich Collegiate Inventors Award (1997). Letsinger served on a number of editorial boards and committees for the National Institutes of Health.

Letsinger graduated from the Massachusetts Institute of Technology (MIT) in 1943 and also earned his Ph.D. in organic chemistry from there in 1945. During World War II, he carried out research at MIT with the Rubber Reserve Corporation and contributed to the development of an effective new method for preparing synthetic rubber.

The family invites the Northwestern community to join them in a celebration of Robert Letsinger’s life at 10:30 a.m. June 28 at Trinity Methodist Church, 1024 Lake Ave., Wilmette, Illinois.

“The world will remember Bob for his contributions in the chemical synthesis of DNA: his inventions provide the basis for high-throughput DNA synthesis and sequencing. His work thus fueled several recent revolutions in biomedical research that led to the emergence of new fields such as genomics, biotechnology, personalized medicine and synthetic biology. Bob’s students and colleagues will remember him as a great mentor whose gentle manner and profound advice encouraged us to the highest levels of accomplishment.”

“Bob was immensely creative, focused and deep. He also was very supportive of all the students at Northwestern in chemistry, including me. He kept a very sharp focus in his science, coupled with great imagination and an unerring sense of how to do and what to do. He is one of the great builders of the chemistry faculty at Northwestern, as well as a key player in the chemistry of DNA. Finally, he was a warm, gentle, patient man, with a great sense of humor à la the Midwest, and a tremendous, imaginative understanding of molecular matter.”

“Bob was a tremendous scientist, teacher and human being. From the time I came to Northwestern — 38 years ago — I revered and tried to emulate Bob, not because of his scientific prowess, but because of his humility, kindness, thoughtfulness and sense of humor. He was someone you always felt comfortable with, and made me feel at home from the time I came to Northwestern, and, despite our difference in age — which doesn’t seem so much now — Barbara and I always enjoyed spending time with Bob and Dorothy.”