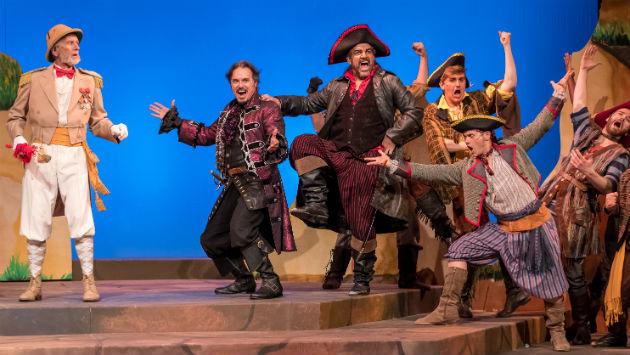 Music Theater Works launched its 38th season this weekend with Gilbert and Sullivan’s musical farce, “The Pirates of Penzance,” at Evanston’s Cahn Auditorium.

“Pirates,” with its beloved cast of character including the dashing Pirate King, the eccentric Major General and the bumbling Sergeant of Police, not to mention the slightly clueless young lovers Frederic and Mabel, has been a hit with audiences since its premiere in 1879.

A movie version starring Kevin Kline and Linda Ronstadt was produced a little over one hundred years later, and the popularity of “The Pirates of Penzance” has yet to let up.

This “Pirates” features an all-star line-up of company favorites.

James Harms, the Chicago theater legend who has graced the stages of the Goodman, Chicago Shakespeare and many more, returns as the Major General. Music Theater Works audiences have seen in a gallery of Gilbert and Sullivan comic leads, as well as the high drama of Cervantes in “Man of La Mancha.”

Larry Adams, another favorite leading man, dons the crown of the Pirate King. Only last December he was another famous pirate, the villainous Captain Hook in “Peter Pan.” Other leading roles with the company have included Emile de Becque in “South Pacific,” Fred in “kiss Me, Kate” and Captain von Trapp in “The Sound of Music.”

The versatile singer-actress Nancy Hays, who embodied the title role of the company’s 2016 “Mame” in grand style, plays Ruth, the lovably scatter-brained nursemaid who unwittingly sets the plot in motion.

Much of the loveliest music in “The Pirates of Penzance” goes to the young lovers Frederic and Mabel. Ben Barker and Celia Iole, who set off vocal fireworks starring in last season’s Leonard Bernstein classic, “Candide,”  return to the Music Theater Works stage as the conflicted pirate apprentice and his faithful lady love.

Even the smaller roles feature big talent; for example, Samuel, the Pirate King’s trusty sidekick, is company comedy stalwart Cary Lovett, so memorable as Sancho Panza in “Man of La Mancha,” Alfred P. Doolittle in “My Fair Lady” and Nicely-Nicely Johnson in “Guys and Dolls.”

Music Theater Works’ “The Pirates of Penzance,” staged by the company’s artistic director Rudy Hogenmiller, with music director Linda Madonia leading a cast of 29 and a 26-piece orchestra, will runs through June 17 at Cahn Auditorium, 600 Emerson St. For tickets, call (847) 920-5360 or visit MusicTheaterWorks.org.