Despite objections from a neighbor, the Plan Commission has voted unanimously in favor of a plan to turn a vacant industrial building at 2100 Greenwood St. into 26 live-work condominiums.

Sam Mokhtarian, whose SD&S Properties, Inc. owns the factory building at 2020 Greenwood St., called the proposal spot zoning that would harm his tenant and other industrial owners in the area.
His building is leased by the Spartech Corporation, a manufacturer of plastic packaging materials for the food service and other industries.
Mr. Mokhtarian said at the commission’s Dec. 14 hearing that he feared residents of the new condos would complain about truck traffic and noise from the factory and that might lead Spartech to pull out of the city.
He also said he’s considering adding a new loading dock area for the Spartech factory on vacant land between the two properties which would reduce green space and views for buyers of the condos.
He said other potential purchasers of the 2100 Greenwood property would use it as a factory, but admitted under questioning from plan commissioners that neither he nor any other buyer with industrial uses in mind had acquired the property during the three years it was vacant. 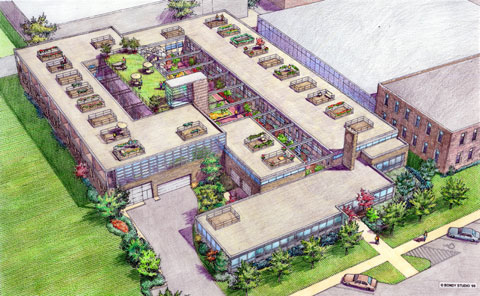 An architect’s rendering showing an aerial view of the proposed 2100 Greenwood project.
Stephen Engelman, the attorney for the 2100 Greenwood developers, denied that the requested change from general industrial to transitional manufacturing was spot zoning.
Mr. Engelman, a former Evanston alderman, said there are at least nine other zoning districts in the city of 1.2 acres or less â€“ the size of the Greenwood parcel.
â€œThe most significant one,â€ Mr. Engelman said, is the former Nabisco factory at Custer Avenue and Linden Place â€œin an industrial district across from a residential district in which the property was turned into residential live-work lofts.â€
The Greenwood property is also across the street from an existing residential district.
Charles Booker of 2022 Lake St. said that he and other members of the Lake, Brown, Grey, Greenwood block club had met repeatedly with the developers and toured the project site.
â€œWe appreciate the openness of the developers to our block club,â€ Mr. Booker said. He added that neighbors generally favored the condo project, but said they also appreciate the jobs that Spartech creates in the community and wouldn’t want those to be lost.
He received assurances from city staff that neighborw would be kept informed if any substantial changes were made to the condo project.
Annette Logan of the Evanston Community Development Corporation said the condo project would be â€œa big benefit to the neighborhood and a great model for developers in the future.â€
She said the project would increase tax revenue for the city and the West Evanston Tax Increment Financing District and noted that the developers are already offering education and job training programs for high school students and will provide construction jobs to local residents.
The proposal next goes to the City Council’s Planning and Development Committee, which is likely to discuss it at its Jan. 12 meeting.
The Plan Commission also approved and sent to the City Council a set of design guidelines for planned developments in Evanston.
The design proposals have been under consideration for over a decade. An earlier version of the proposal would have made the guidelines mandatory, but that was rejected by the City Council.
Assistant Corporation Counsel Ellen Szymanski said the new guidelines would put applicants on notice about things the city wants, â€œbut in any particular case there may be special considerations that would cause the guidelines not to apply.â€
The commission postponed discussion of three other projects on its agenda until January.
The Plan Commission how has a dozen projects on tap for its review and plans to start meeting twice a month beginning in January. Its next meetings will be on Jan. 18 and 30.