Commissioner Johanna Nyden said, "You did an amazing job of taking into account the suggestions we made and making meaningful changes in the building."

But Commissioner David Galloway suggested a number of additional changes to the project — especially in the design of the live-work units along the Chicago Avenue frontage of the more southerly of the project's two buildings. 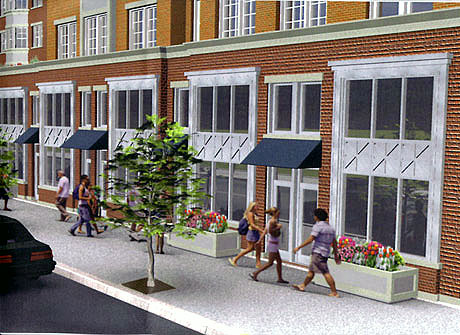 A rendering of the live-work units facing Chicago Avenue.

Galloway said he thought the window treatments on the loft-like units made them look more like townhouses than the turn-of-the-century storefront look he thought the architects were trying to achieve. He suggested taller windows at the first floor level and smaller ones above, a suggestion that drew no complaint from the developers.

Steve Ross of Evanston Devco LLC, the project developer, said that despite "the historic capital crisis" now underway in the country, he's confident the project will move forward.

He cited the financial strength of the backers of the development, the $10 billion Morgan Stanley Prime Property Fund and AMLI Residential, a national developer and manager of apartment projects.

And he said population trends as well as economic forces suggest that the rental apartment market will be strong over the next several years.

He said that the nation's population is growing steadily with 1.5 million new households added each year. And the "echo boom" generation reaching adulthood will add more young households likely to rent.

In addition the turmoil in the home ownership market is likely to reduce the percentage of households who rent from the current level of over 68 percent toward its historic average of 65 percent. And each percentage point drop in homeownership adds another 1.2 million households to the rental housing pool.

And, he said, because of the market turmoil, construction cost increases are beginning to abate, so "2009 looks like the best time to buy construction in recent years." 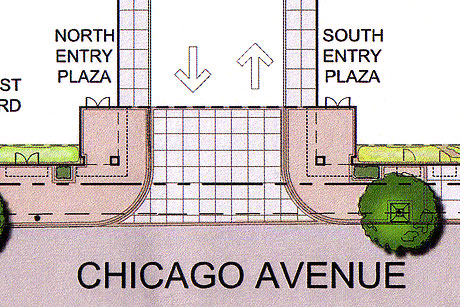 Based on earlier comments from the Plan Commission, the developer reduced the driveway between the two buildings to two lanes, from three, and moved the building entrances to face the street rather than the drive. The commissioners concluded that would reduce the chance for conflicts between pedestrians and cars at the crosswalk.

The five-story, 60-foot-tall development includes a total of 312 parking spaces and a small cluster of retail shops at the Chicago-Kedzie intersection along with a small plaza that would be open to the public.

The plan next goes to the City Council's Planning and Development Committee, which is likely to take up the proposal at its Nov. 10 meeting.