The Plan Commission next week will receive proposals to rezone property along the old Mayfair rail corridor from Simpson to Greenwood streets. 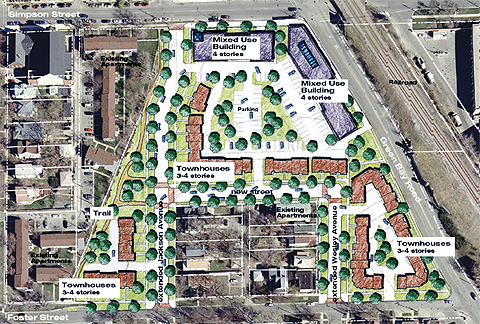 One of the plan options for the area from Simpson to Foster Streets between Ashland Avenue and Green Bay Road.

The plans, developed in a series of neighborhood meetings conducted by two consulting firms hired by the city, call for wiping out industrial uses along the corridor and replacing them with a mix of townhouses, apartments and mixed-use retail and apartment buildings.

They narrowed the choices for each of three sub-areas down to two options. The consulting firm hopes to blend the best parts of each of the favored options into a single design in time for the Plan Commission session at 9 p.m. on Wednesday, Nov. 8, in the City Council Chambers at the Civic Center.

In the plans a pedestrian and bicycle trail would follow the old rail line throughout the area, and several streets that now dead end at industrial sites would be extended across the area.

For the area from Simpson to Foster Street, the favored designs call for replacing the existing Public Storage facility in a former dairy plant with a mixed use retail and residential building four or five stories tall that might retain the old dairy’s facade.

From Foster to Emerson Street, the preferred designs call for more townhouses, with a four-story apartment building on the north side of Emerson, just east of the existing Jacob Blake senior citizen mid-rise apartment building. The street would be redesigned to include two bike lanes and traffic signals at the point where the pedestrian and bike trail crosses the street.

The preferred designs call for two four-story mixed use retail and apartment buildings on the south side of Emerson, where the postal truck storage facility and a small strip-commercial development are now. The rest of the land south to Church Street would be dominated by more townhouse developments, with possibly one apartment building fronting an extension of Lyons Street.

About two-thirds of the dwelling units would be townhouses — the rest would be apartments.

The plans don’t specify whether the housing would be owner-occupied or rental units, but consultant Valerie Kretchmer said at the Fleetwood-Jourdain meeting that it’s extremely difficult to build new rental housing in Evanston, given high land and construction costs, unless the buildings receive government-subsidized financing.

Residents at the meeting seemed satisfied with the consultant’s conclusions that to achieve moderate prices for the new housing it’s not feasible to include single family homes in the plans.

Ms. Kretchmer said she anticipated that townhomes developed in the area would sell for between $350,000 and $500,000 depending on their size.

The plans assume that the Commonwealth Edison substation south of Emerson Street will not be relocated, and they avoid locating housing beneath the high-tension power lines that run from the station.

The plans also assume that National Awards and Cahill Plumbing, two industrial uses that front on Church Street whose owners say they have no plans to move, could be redeveloped separately at a later time from the rest of the area if desired.

Some industrial properties in the area are now vacant and others are under contract to developers who hope to construct residential projects. City officials have concluded that prospects are minimal for maintaining industrial uses of the land because industrial users now tend to seek larger parcels with better access to interstate highways.

JJR Inc, the consultant for the southern part of the study area, which focuses on the business district at Church Street and Dodge Avenue, held its last community meeting on Oct. 12. The plan for that area calls for about 20,000 square feet of retail space concentrated at the intersection and 188 housing units in a combination of apartments near the intersection and townhouses along the old railroad right of way.

Designs for the two options preferred by residents at Wednesday’s meeting for each of the sections of the Farr Associates study are available as attachments below.