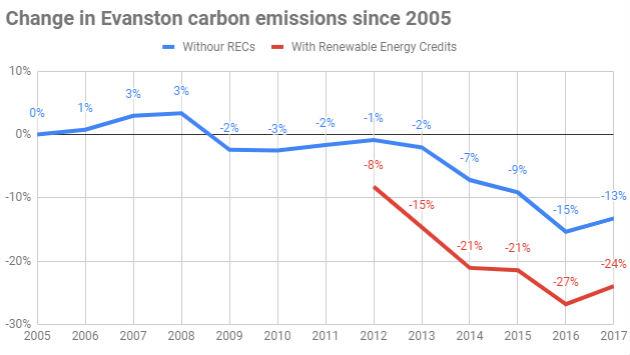 Evanston aldermen this week adopted a climate plan that calls for reducing local greenhouse gas emissions in the next seven years by even more than the reductions achieved over the past 12 years.

And nearly half of the reduction achieved so far has come from purchasing renewable energy credits.

Here’s how the Climate Action and Resilience Plan breaks down the sources of Evanston greenhouse gas emissions as of last year:

The plan has dozens of other recommendations and calls for an eventual goal of a carbon neutral city by 2050.

The plan makes no meaningful assessment of the cost of achieving any of its goals. But City Manager Wally Bobkiewicz this week promised to return to the Council by next March with some information on likely costs of the program.