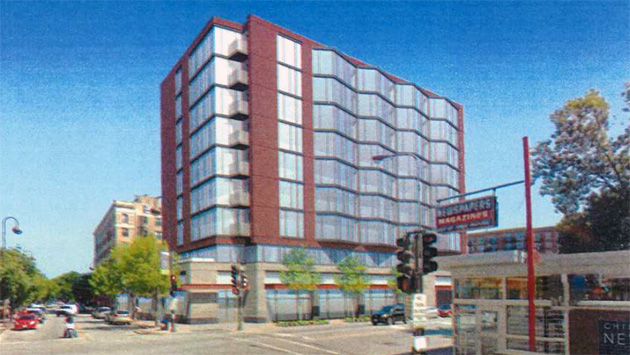 With commission members and neighbors raising doubts about whether it provides enough parking, the Evanston Plan Commission Wednesday night delayed a vote on a mixed-use development planned for Chicago Avenue at Main Street.

The postponement came under a Plan Commission procedure that allows nearby residents who object to a project to automatically receive a one-meeting delay of the commission's vote, ostensibly to give them more time to gather information to support their complaints.

The proposed nine-story building would have seven floors with a total of 112 rental apartments as well as one floor each of retail and office space on the first and second levels.

The proposal, from developer John O'Donnell, was prepared in close collaboration with city staff, which is supporting O'Donnell's contention that, with 104 parking spaces, it provides sufficient parking for a development adjacent to two mass transit stations.

But several neighbors who spoke, and several plan commission members argued that it would actually need far more parking.

Community Development Director Mark Muenzer promised to have more data available about parking ratios for transit oriented developments in time for the commission's next hearing on the project, at 7 p.m. on Wednesday, Feb. 26.