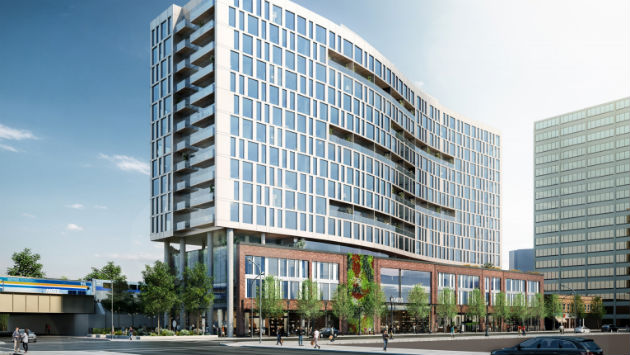 The project, which was first announced in April, would replace the Prairie Moon and Tommy Nevin’s restaurants, but includes space for a restaurant and two other retail uses on its ground floor.

Last week the city’s Design and Project Review Committee recommended approval of the development, which will provide a $2.9 million contribution to the city’s affordable housing fund as well as include two affordable units on site.

Objectors to the project have complained about the proposed height of the building and question whether the planned 172 parking spaces at the transit-oriented development site will be sufficient.

A rendering looking northwest from the Lake and Sherman intersection.

A city staff memo to be presented at tonight’s meeting says the project meets all standards for approval as a planned development.

The developer says that once completed the building will pay about $945,000 a year in property taxes and a consultant hired by the developer estimates that the project — because it consists mostly of studio and one-bedroom apartments — will house only 14 school-age children, yielding a surplus of revenue for the city’s two school districts.